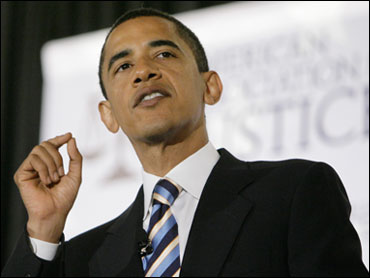 Barack Obama is now officially hot: He's on the cover of Vibe magazine.

In a profile for the 14th anniversary issue of the music and lifestyle glossy, the Democratic presidential candidate clarifies his views on rap. Though he had a high-profile meeting with rap star Ludacris last fall, he was also quoted by The Associated Press in April as saying that rappers were "degrading their sisters. That doesn't inspire me."

Obama told Vibe that he was misquoted — he was talking about the culture as a whole, not rappers in particular.

"I stand by exactly what I said, which was that the degrading comments about women that (radio host Don) Imus said is language that we hear not just on the radio, not just in music. We ourselves perpetuate that, and we all have to take responsibility for that."

But the Illinois senator also didn't let rappers off the hook.

"There's no doubt that hip-hop culture moves our young people powerfully. And some of it is not just a reflection of reality," he told the magazine. "It also creates reality. I think that if all our kids see is a glorification of materialism and bling and casual sex and kids are never seeing themselves reflected as hitting the books and being responsible and delaying gratification, then they are getting an unrealistic picture of what the world is like."

Still, Obama seemed unwilling to use raunchy rap as a rallying cry in his campaign: "My priority as a U.S. senator is dealing with poverty and educational opportunity and adequate health care. If I'm ignoring those issues and spending all my time worrying about rap lyrics, then I'm wasting my time."

So why put a politician on the cover of a magazine that had 50 Cent fronting last month's issue?

"Because for the first time since Vibe was launched in 1993, a political figure has burst on the scene and fired up young people in a major way," Vibe editor in chief Danyel Smith said by e-mail. "Because regardless of who wins the election, the senator will have inspired many new voters to the polls. Because Obama is frank, brilliant, vibrant, and not cynical — all things that make him a perfect Vibe cover."