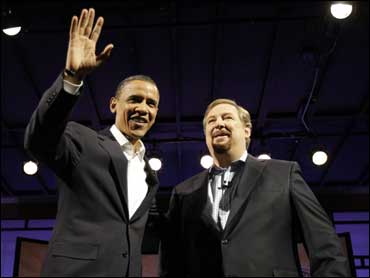 This column was written by By Byron York.

A few minutes before the McCain-Obama joint appearance began at Pastor Rick Warren's Saddleback Church on Saturday evening, I struck up a conversation with a couple from Lake Arrowhead, California, about 80 miles from here. When I asked who they supported for president, the woman told me, "McCain, if he'll choose a pro-life running mate."

"That's very important to you?" I asked.

"Would you support Obama under any circumstances?"

"Absolutely not," she answered. "I will not vote for a Muslim."

She paused for a moment and repeated: "He's a Muslim."

I realized I had found part of that 12 percent of Americans who confuse Obama's ties to Islam - unprecedented for an American presidential candidate - with his actually being a Muslim. I decided to move on to another topic - the new agenda for evangelicals. Did they think issues like AIDS and poverty are as important to evangelicals as abortion and gay marriage?"

"Well, we're going to Kenya next month," the man told me. It turned out they are paying their own way to travel to Africa, where he will do volunteer work providing clean water and she will work on AIDS education. The man asked for my notebook, on which he wrote down a web address, waterforkenya.org, and asked me to take a look at their work. They're truly doing good things, he said.

On further reflection, it seemed I had stumbled across a two-person focus group for some of the more interesting strains of religious conservatism as the 2008 election approaches. And it was all set against the backdrop of Saddleback World. Like the evangelicalism here, it's new; more than anything, the 120-acre campus resembles a sprawling suburban outdoor mall. Just think of the Worship Center, the anchor of it all, as standing where Saks or Macy's would be; the Saddleback Beach Café in place of the Macaroni Grill; the AIDS Exhibit where one would normally find Barnes & Noble. Surrounding it all are acres and acres of parking space, and then desert scrub. The weather, of course, is gorgeous.

This is not exactly Barack Obama Country. It's Orange County, and these are Orange County evangelicals. Nationwide, a Pew Poll last week showed John McCain increasing in strength among white evangelical voters, leading Obama 68 percent to 24 percent. That's up from June, when McCain led 61 percent to 25 percent. Inside the Saddleback Worship Center, it's probably more lopsided than that. Certainly among the Saddleback parishioners; in a conversation a few years ago, Warren guessed that just 15 percent of his churchgoers voted for John Kerry in 2004.

After the McCain-Obama forum, the conventional wisdom was that Obama had done himself some good just by showing up. But it's hard to imagine he'll benefit much from his stumble on the still-key issue of abortion; when asked when human beings begin to have rights, he said the answer was "above my pay grade." After the session, Obama's representatives tried to emphasize not his position on the issue but his openness in dealing with people who disagree with him. "It's always going to be the case that there is a wide range of opinions on that difficult issue," Joshua Dubois, the national director of religious affairs for the Obama campaign, told me. "And that's why it was important that Sen. Obama didn't come up with an easy answer."

It wasn't hard to hear a certain amount of hope in those words. And in the words of Shaun Casey, too. The evangelical coordinator for the Obama campaign, Casey explained Obama's appeal in terms of generational change. Looking around the Worship Center during the forum, Casey told me, "My hunch was the older demographic was for McCain and the younger demographic was far more excited for Obama, which tracks with my experience in the last five weeks traveling around the country talking to evangelicals. The younger you get in that demographic, the more receptivity there is for Obama."

Whatever the case, from Obama's perspective, there was a lot of hope in the room. Hope, but probably not a lot of votes.

The morning after the candidates' forum, I went back to Saddleback for Pastor Rick's 9 A.M. service. It was an unusual production; this particular service was being taped for distribution on DVD. But it showed the kind of performance Warren can put on. There was a seven-piece band on stage right, playing high-volume Christian rock. On the Jumbotrons, the whole production looked a bit like The Tonight Show, with the camera cutting quickly from the musicians to the crowd. And then Pastor Rick walked on stage, in jeans and a rumpled blue shirt, tail out.

It was a characteristically casual entrance, but the reason this service was being taped was that Warren was to deliver his "Message to the Nation." His message was about leadership, and the country's need for good leaders. The most important qualities for a leader, Warren said, are integrity, humility, and generosity - the "three-legged stool, the foundation of true leadership." Warren played it straight down the middle; he didn't say anything that one could interpret as favoring McCain or Obama.

But there's no doubt Warren is solidly conservative on the traditional social issues. Back in May 2005, I attended a meeting with him and about 20 journalists in Key West, Florida, organized by the Pew Forum on Religion and Public Life. Warren was asked several questions about abortion and gay marriage. He kept trying to tell everyone that, while important, those weren't the only issues on his list. But he also made it clear where he stands. "Of course, if I believe every child is born for a purpose…then obviously I would believe that abortion short-circuits a person's purpose," he said. On marriage, he said, "I don't accept gay marriage. I don't think that a gay relationship is exactly what God wants in life…[But] in the hierarchy of evil, I would say homosexuality is not the worst sin. But I would also say homosexuality is not natural. I think that there are certain parts of a body that are made to fit together." When it came to politics, Warren made some seriously Republican-sounding statements, like, "What I worry about is the tyranny of activist judges…I do not believe in judges who go out and find all kinds of excuses to thwart the will of the majority."

So far, Warren is staying away from expressing any public preference for one candidate or the other. Both "Barack" and "John" are friends, he says. But Warren, and everyone else in the room, knew that Obama, for all the hype, was swimming upstream in his visit to Saddleback. There may be a lot of stories about evangelicals flocking to support him, but so far, he's not truly at home in Saddleback.