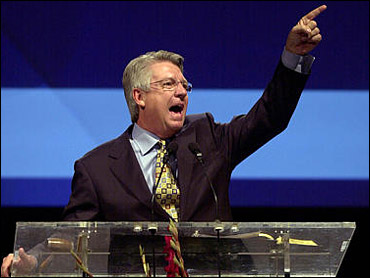 The Southern Baptist Convention announced a new initiative Tuesday to convince gays that they can become heterosexual if they accept Jesus Christ as their savior and reject their "sinful, destructive lifestyle."

At the denomination's annual meeting, leaders urged their more than 42,000 churches nationwide to reach out compassionately to gays with a message about how Christianity can save them.

"Homosexuals can find freedom from this sinful, destructive lifestyle," said Richard Land, head of the Southern Baptists' public policy arm. "They can be redeemed. They can be liberated."

The presentation included testimony from a Southern Baptist pastor from Texas who said he realized that his strident criticism of homosexuals had prevented them from coming to him for help.

There are several Christian groups in the United States that try to convince gays that they should become heterosexual.

But David Smith, spokesman for the Human Rights Campaign, a gay advocacy group in Washington, said the ministries generally are attached to smaller and in some cases "obscure" churches that do not have the influence of the Southern Baptists. The convention is the biggest Protestant denomination in the country, with 16 million members.

"If the Southern Baptist Convention embraces such an outreach, it would be the largest denomination to do so," Smith said. "They're promoting 'Love the sinner, hate the sin' but they're really saying that gay people are bad and that gives license to violence."

A Southern Baptist task force on ministry to homosexuals developed the initiative after they discovered several of their churches and agencies were either conducting or supporting such outreach already.

This latest push is meant to make these efforts a priority for churches around the country. The task force developed a Web site that has Bible study materials, testimonials from gays who became heterosexual and advice on helping people who have AIDS.

The Southern Baptists, like all evangelicals, have been speaking out against homosexuality for years, including boycotting the Walt Disney Co., partly because gay groups hold their "Gay Days" festivities at Disney's amusement parks.

Gay rights groups picket the Southern Baptist meeting each year, accusing them of spreading hatred, and last year, 50 of the activists were arrested after they tried to disrupt the gathering.

But the denomination took pains this year to draw a distinction between themselves and activists like anti-gay pastor Fred Phelps of Topeka, Kan., who travels the country picketing religious meetings and other public events, carrying signs that read, "God Hates Fags."

Land insisted Southern Baptists wanted to help gays, and encouraged homosexuals in the meeting to come forward to seek help. "We want you to know that we love you, and more importantly Jesus loves you, and there is a way out," Land said.

Earlier Tuesday, the Southern Baptist president in a keynote address urged members to denounce sinful behavior and proclaim Christianity the true religion, ignoring critics who believe their faith is bigoted.

The Rev. Jack Graham said evangelicals should respond to opponents not by "retreating into some Christian subculture," but should instead "penetrate the darkness of our culture" with the teachings of Jesus.

Graham, head of the 21,000-member Prestonwood Baptist Church in Plano, Texas, was re-elected to a second one-year term by the nearly 7,000 attendees later Tuesday.

President Bush addressed the meeting earlier by videotape, calling the Southern Baptists "faithful servants" and asking God to bless them.

The meeting was scheduled to end Wednesday night, with attendees approving resolutions that express the Southern Baptist view on issues but are not binding on individual churches.