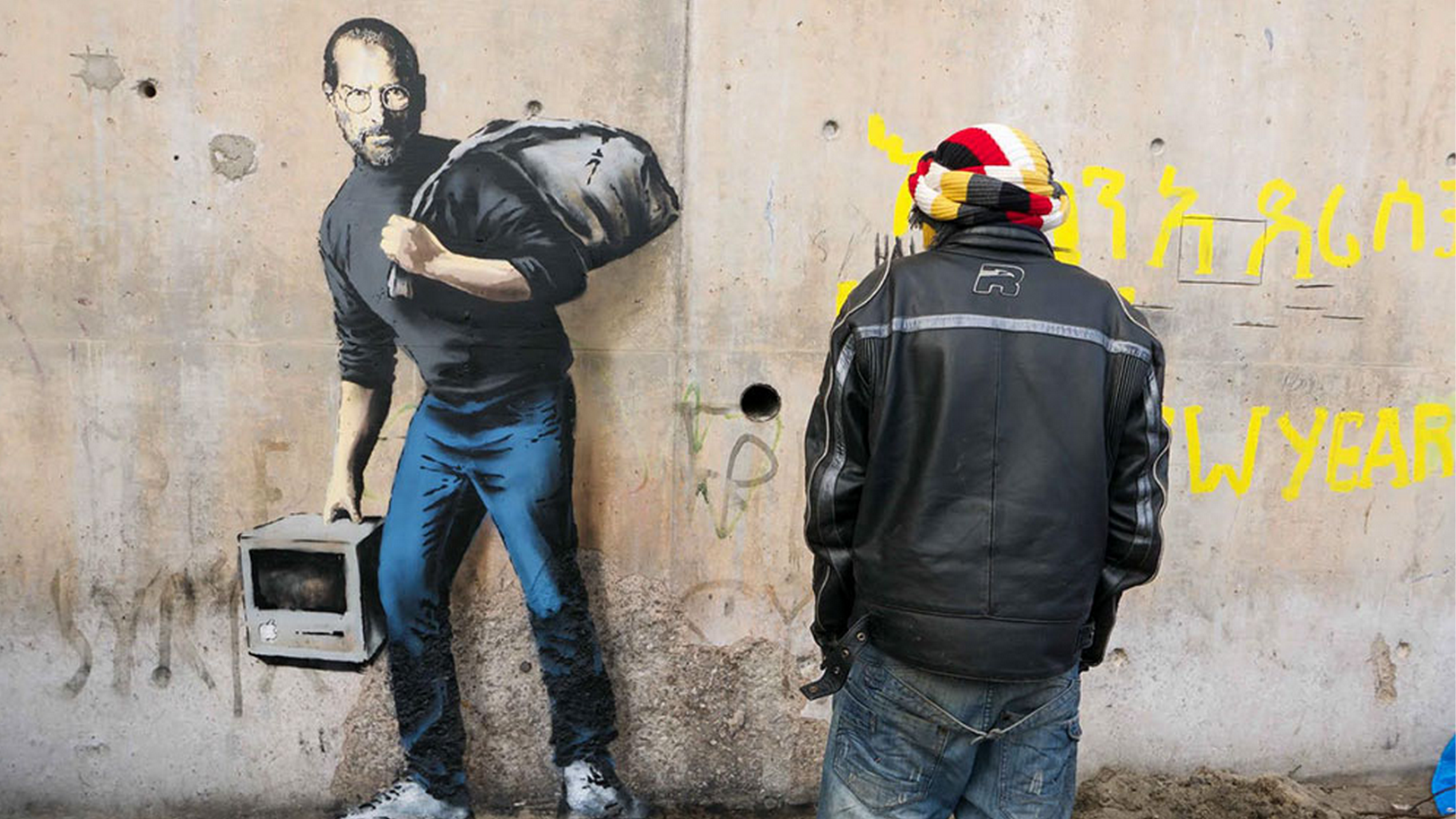 His name is Steve Jobs.

A portrait of the Apple co-founder, wearing blue jeans, glasses and his signature black turtleneck, is now featured on a wall in the "Jungle" camp for migrants in Calais, France. In one hand, Jobs is holding a historic Apple-1 computer; in the other, he's holding a sack over his left shoulder.

"The son of a migrant from Syria," the anonymous artist simply captioned a photograph of his artwork online.

The painting serves as a reminder that Jobs' biological father, a man named Abdulfattah "John" Jandali, was born in Syria and moved to the U.S.

Many people may not know Jobs was the son of an immigrant; he was given up for adoption after he was born in San Francisco in 1955. Paul and Clara Jobs gave him his name and moved out of the city in 1960 to Silicon Valley.

By 1976, Jobs had co-founded Apple Computer from his parents' garage.

If Jobs' father hadn't been able to move to the U.S., the country may have ever been introduced to Apple, Banksy points out.

"We're often led to believe migration is a drain on the country's resources but Steve Jobs was the son of a Syrian migrant," Banksy reportedly said in a public statement. "Apple is the world's most profitable company, it pays over $7bn (£4.6bn) a year in taxes - and it only exists because they allowed in a young man from Homs."

This isn't the first time Jobs has been associated with Syrian refugees.

In September, a Twitter user posted a photo of Jobs with the caption: "A Syrian migrants' child." The photo was shared by more than 15,500 people.

The tweet continued an ongoing debate as to whether the U.S. should accept more refugees.

Over the past four years, roughly 2,200 Syrian refugees have been allowed in the country -- and President Barack Obama has outlined a goal of bringing 10,000 more Syrian refugees to the U.S. during the current budget year.

Some praise the Jobs comparison, while others point out its weakness.

"He was adopted so culturally had very little to do with Syria," one person tweeted.

"A worthy visual commentary still. Power remains in the message," another replied.