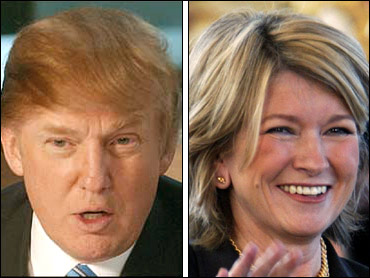 The real scandals are the ones that are perfectly legal.

Exhibit A: Donald Trump. The Donald.

Exhibit B: The United States Congress. The Hacks.

The case: Bankruptcy, with side orders of moral obnoxiousness and egregious ostentation.

High dudgeon this week has been reserved for Martha Stewart's flamboyant crusade to cash-in on incarceration, pander while on parole and market the psycho-babble and victim-speak of a billionaire. While I applaud the catcalls -- the redemption project has been revolting -- Martha Inc. ain't nuttin' compared to the guy she's about to go into business with, The Donald.

Martha was convicted of lying to the feds. That, as her saying goes, is a bad thing. It deserved punishment, yes. Did she ever show contrition? No. But frankly, the actual legal infraction harmed no individuals. Prosecuting it cost the government a bundle. And she actually was not guilty of the underlying offense -- insider trading.

Martha Stewart also was self-made; she was not born rich. Reportedly, she can be mean and venal in private, but before the money scandal, her public image represented relatively decent values, even if she was an egomaniac who turned her identity and existence into a commodity.

Trump never broke the law. He used it. His scandals are legal.

Trump was born into big-time wealth and has flaunted his money and luck over American society ever since. His serial divorces of trophy wives, his abusive television show, his nyphomaniacal self-love and self-promotion and his opulent parade of wealth you can't even dream about, sucker, epitomize the post-modern grotesque. Put more simply, he is a pawn of Satan.

Image and optics aside, he like Martha, has legal issues. His casino company is currently trying to wiggle its way out of bankruptcy. This is his second foray into bankruptcy. It's hard to get in an ethical lather about a fight between Donald Trump and his investors and lenders; it's a fight between the obscenely wealthy and the fantastically rich. But by definition, people get screwed in bankruptcies. But it won't be The Donald, you can bet on that.

Trump Hotels & Casino Resorts Inc. is a public company. There are stockholders who are not moguls and who lost. Again, it's hard -- ok, impossible -- to feel sorry for anyone who would invest with Donald Trump. Usually in bankruptcy cases, there are small creditors -- vendors, janitors, merchants -- who do not get paid what they are owed. I don't know if this has happened with Trump's bankruptcies. I do know that Trump has often said that his casino holdings are only about two percent of his fortune. So, presumably he could have avoided bankruptcy if he were willing to pony up from his other pockets.

Instead, Trump told Newsday that bankruptcy will make his TV show "even better." Disgrace pays when there is no grace. Or shame.

Now it's time for The Column's Segue To Public Policy: your Congress and your president are on the verge of making it much harder for the people who watch "The Apprentice" to protect their finances through bankruptcy and easier for coiffed fat-cats like Trump to cover their… assets.

Most people who file for bankruptcy don't do so because their multi-million dollar casino plays didn't pan out. A recent study from Harvard concludes that about half of all bankruptcies are caused by medical crises; someone in normal financial circumstances can be hit by a health catastrophe, unable to earn, with bills far exceeding what insurance will ever cover.

Many other bankruptcies are aided and abetted by the aggressive "lending" tactics of the credit card and finance companies that have spent $40 million lobbying for this exact bill since 1990. I certainly don't absolve small debtors of personal responsibility any more than The Donald. But unsophisticated consumers are easy marks for ultra-savvy credit card companies that can get you tangled up in huge interest payments faster than you can say "check, please."

The bill-about-to-be-a-law would make it substantially harder for individuals to get Chapter 7 bankruptcy protection. Many bankruptcy filers would be forced to repay their creditors something over time. That may be a good thing.

But the bill also extends an increasingly popular loophole that lets wealthy people protect substantial assets from creditors even after filing for bankruptcy through things called asset protection trusts.

Five states exempt assets held in these trusts from the federal bankruptcy code and you don't have to live in those states to use the trusts. They are increasingly popular with doctors and corporate executives who face potential lawsuits. They'll get a lot more popular. And credit card companies will collect a whole lot more dough from teachers making $35,000 a year.

The real scandals are the legal ones. And that is a bad thing.

When the Media is the Disaster
View CBS News In
CBS News App Open
Chrome Safari Continue
Be the first to know
Get browser notifications for breaking news, live events, and exclusive reporting.