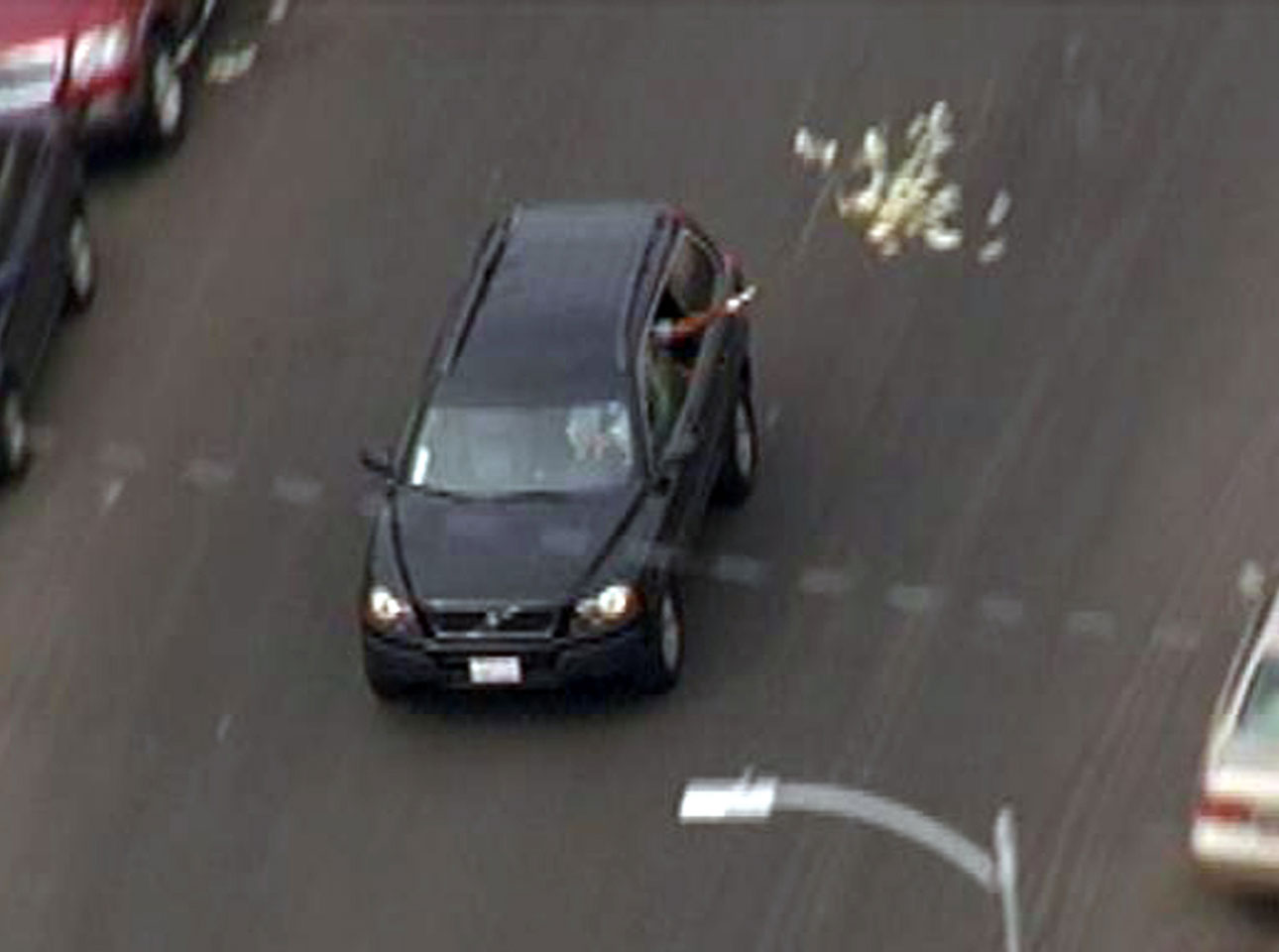 (CBS/AP) LOS ANGELES — A wild pursuit of bank robbers across Southern California has come to an end with the capture of two men who had hurled cash out of their SUV's windows during the chase.

The vehicle became blocked by traffic in South Los Angeles at late morning Wednesday and sheriff's deputies pulled the men out. A large crowd surrounded the scene and officers set up skirmish lines to move people away.

In a bizarre scene followed by TV helicopters, a large crowd pressed in as deputies with guns drawn pulled two men from the SUV in South Los Angeles. City police came to their aid and formed skirmish lines to move the crowd back.

Along the pursuit's route through a low-income part of the city, people were seen scooping up the money.

"It's our neighborhood stimulus package!" resident Diane Dorsey told the Los Angeles Times while she watched the bedlam unfold from her front yard at the corner of Kansas and Vernon avenues.

Police Department spokesman Cmdr. Andrew Smith said it appeared the suspects threw the money in hopes of drawing people into the roadway to block the pursuing patrol cars.

But the aunt of one of the arrested men, Keon McGowan, told CBS News she believes her nephew was just trying to give money to his neighbors (video above).

"We are poor," she said. "I mean, I don't justify what happened, but we are desperate."

Several hundred people gathered around the deputies during the dangerous moment of arrest.

The incident began about 35 miles northwest of downtown Los Angeles in the suburban Santa Clarita area, where four men committed an armed robbery of a Bank of America Branch, reports CBS station KCBS in Los Angeles. Three men entered the bank, while the fourth remained in the getaway car.

The robbers fled south by freeway and en route, two robbers bailed out of the SUV in the Sylmar area of the San Fernando Valley. One of those men was apprehended, the other is at large.

The SUV pursuit continued into downtown Los Angeles, where the SUV exited the freeway and began a circuitous route through the older, narrow streets of the city's central and southern areas.

The 90-minute chase came to an end when a big, heavy duty pickup made a right turn from a side street and blocked the SUV's path. It was not clear whether that driver did so intentionally.

A gun and a knife were recovered from the SUV, which had been reported stolen out of South Los Angeles, Commander Bob Green of the Los Angeles Police Department told KCBS.

Two people were injured in the pursuit, authorities said. A police officer's foot was run over by a vehicle and a bystander was injured by a cruiser.

Police were asking anyone who may have recovered money thrown from the suspect's vehicle to turn it in as it is evidence in the investigation, KCBS says.