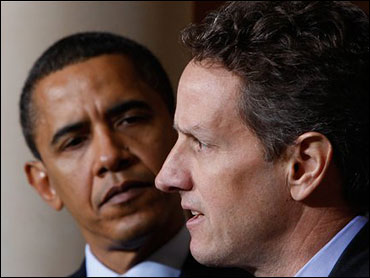 A top economic adviser to President Barack Obama said Wednesday that the financial wounds at the center of the economic downturn will require "lots more billions of dollars" to mend.

"It's going to cost more money to deal with this financial crisis," Paul Volcker, chairman of the president's Economic Recovery Advisory Board, told members of the Senate banking committee. "It's going to be lots more billions of dollars."

Volcker said he could not affix a figure to the cost of helping financial institutions free themselves from suffocating bad assets that have locked up credit.

Earlier, Treasury Secretary Timothy Geithner said the government will have to do "substantially more" to address the crisis.

The blunt predictions came as the administration was preparing to unveil a new framework for how to assist banks and other financial institutions with the unspent money in a $700 billion financial rescue fund. Geithner is scheduled to announce the new approaches in a speech next week.

Separately, Mr. Obama warned that the recession will turn into a "catastrophe" if Congress doesn't pass an economic stimulus package quickly.

Lawmakers, faced with public antipathy to the Wall Street bailout, have cautioned the administration not to seek more money.

The administration has not yet tipped its hand. But its options include direct capital infusions into banks, guarantees against losses on bad assets and a "bad bank" to buy distressed assets.

Citigroup Inc.and Bank of America provide an example of how the administration could proceed. Both banks received what the administration has called "exceptional assistance" that included taxpayer money from the Troubled Asset Relief Program as well as guarantees against losses provided by the Federal Reserve Bank and the Federal Deposit Insurance Corp.

By using the Fed and the FDIC, the administration did not have to ask Congress for extra money.

Last month, the Senate reluctantly agreed to let Obama have the $350 billion left in the bailout fund. The House, in a symbolic step, voted against releasing the money. But Obama needed only one chamber to side with him to get access to the funds.

Since then, key Democrats such as Senate banking committee chairman Christopher Dodd of Connecticut and Rep. Barney Frank of Massachusetts, chairman of the House Financial Services Committee, have warned the administration that Congress is in no mood to give it more.

"Until they are successful in showing the average American that the money is being used reasonably, there's no point in asking for it, because they won't get it," Frank said Tuesday.

Other lawmakers have urged Obama's economic team to deal with bad financial assets by guaranteeing them against losses instead of buying them outright.

This week, Sen. Charles Schumer, D-N.Y., a member of the Senate Banking Committee with close ties to Wall Street, warned that the idea of a "bad bank" that would purchase toxic assets would be too expensive and the government would have a difficult time setting a value on the assets.