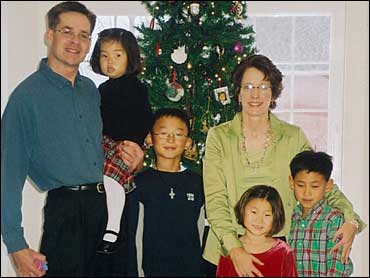 Two baseball bats found in the home appear to have been used in the slayings.

"They're being held as evidence," Sgt. Troy Kelsay said.

Before he died in a fiery crash, Steven Sueppel left a hand-written four-page note in which he detailed how he killed his family, then tried to kill himself. The note was left in the kitchen and apparently was written for surviving family members.

The note, clearly completed after he had killed the entire family, includes details that match evidence found at the scene and the medical examiner's findings, Kelsay said.

"It becomes kind of a moot point whether it was actually a ball bat or some other item," Kelsay said. "We're confident we know what happened and we're not going to talk any more specifics."

The note also reveals some detail about Sueppel's frame of mind and what may have driven the former Hills Bank & Trust vice president and controller to kill his wife and four children.

Sueppel mentioned in the note the embarrassment and other fallout from criminal charges he faced.

He was indicted by a federal grand jury in February on charges that he stole nearly $560,000 between 2000 and 2007 from the bank. Although he had pleaded not guilty in the case, court documents indicate Sueppel had told investigators that he had taken hundreds of thousands of dollars and placed it in an account he held at another bank. He was free on bond awaiting trial in the case next month.

Friends and acquaintances of the family said Sheryl Sueppel, a former teacher, returned to work after her husband lost his job.

In his note, Steve Sueppel discussed his life and the criminal charges, noting that his expected absence from home would leave his wife alone to raise and support four children.

"Certainly part of the note was apologetic in nature," Kelsay said.

Kelsay said Sueppel's note described "here's how I perceive my life and family. Here's what I see going on and for these reasons you can see why this is clearly the best choice for me and my family."

The note chronicles Sueppel's attempt to kill himself and the children by getting into the family van with them and leaving the engine running in the garage.

When that failed, it appears he took them back into the house and killed them.

Sheryl Sueppel was found in her bed in the master bedroom and two children were found in their beds.

In addition to the note he left, Sueppel also eerily documented nearly his every move in a series of telephone messages left at his home and on answering services at the bank where he once worked and the Iowa City law office of his brother and father.

"Even when he was no longer present in the home, he continued to document events by calling back to the home and basically self reporting," Kelsay said.

At 4:01 a.m. Monday, Sueppel's final phone message left at home said he had tried to drown himself in the Iowa River, but he "just kept floating."

It is unclear what Sueppel did between that time and when he used his cell phone to call the Johnson County Sheriff's Department at 6:31 a.m. to ask police to go to his home immediately.

Kelsay said the tone of the calls to the answering machines is similar to that of the 911 call - almost devoid of any emotion.

In one of the messages, he indicated he believed his family was in heaven, Kelsay said.

Five minutes after the 911 call, Sueppel crashed his van into a concrete pillar on Interstate 80 a few miles east of his house.

Police believe the high-speed crash, which caused the van to explode into flames, was an intentional final act of suicide.

Tests have been taken to determine whether Sueppel had drugs in his system. Those results won't be known for several days, Kelsay said.

Investigators said there was no outward sign of illegal or prescription drug use.

After the investigation began into the theft from the bank, Sueppel initially told FBI investigators that he took the money to support a cocaine habit.

But law officers said there is no evidence that Sueppel used the money for either illegal drugs or gambling, reports the De Moines Register.

He later recanted that story and told investigators he made up the story because he could think of no other way to explain the missing money.
A University of Iowa sociologist and police investigators told the Register that Sueppel may have felt pressure to maintain his family's standard of living after his wife stopped working and the couple adopted four children.

The Sueppels had taken out a mortgage in March 2004 from Hills bank for $244,000 for the home on the east edge of Iowa City in a modern subdivision.

Kelsay said the home is no longer a crime scene and is part of the family's estate.

The U.S. Attorney's Office will request that the case against Sueppel be dismissed after receiving a copy of his death certificate, a spokesman said.

A funeral Mass is scheduled for 10 a.m. Saturday at St. Mary's Catholic Church.

The family will be buried at St. Joseph's Cemetery.

Those friends organized the vigil at a makeshift memorial for the family. Sheryl's father Jack shared his thoughts for the dozens who came, and expressed his love for his son-in-law of nearly 18 years.

"He was like our own son," he told CBS News affiliate KGAN-TV in Cedar Rapids. "We loved him like one of our own."

Sister Agnes Giblin, a Roman Catholic nun at St. Mary's church in Iowa City who had known the family for years, said the community is struggling to comprehend the deaths.

"We know that if we didn't believe in eternal life and a merciful forgiving unconditional loving God, we don't know how we'd get through it," she said.