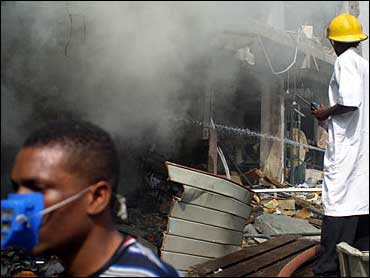 An explosion destroyed a bank and dozens of apartments above it in Nigeria's biggest city, killing at least 40 people and trapping many more in the rubble. Hundreds of young men swarmed the area in a grab for money that littered the debris.

The cause of Sunday's blast wasn't immediately known, but police were considering several explanations, including the possibility that someone was trying to rob the bank.

"My uncle was in the balcony of our house talking with a friend and the force of the explosion threw them down," resident Remi Oyebanji said. "They're both dead."

Ambulance drivers fought to get through crowds of people on the narrow streets to reach the victims, and hundreds of police officers surrounded the damaged neighborhood, dispersing the looters and pushing back onlookers.

Rescuers found more than 30 dead and 32 injured people, the Red Cross said. Ten of the wounded died later at a Lagos hospital.

Many more victims were believed caught in the rubble, and the death toll was likely to rise, said Emmanuel Ijewere, president of the Nigeria Red Cross.

The building housed the bank and three floors of apartments above it. The structure was leveled.

Cranes and other heavy equipment moved in to lift the heavy concrete slabs and other debris.

The blast occurred at about 12:30 p.m. on Lagos Island, a crowded high-rise district of banks and other businesses packed side-by-side with poor, densely populated residential blocks.

The explosion damaged adjoining buildings and shattered the windows for blocks around.

Omololu Kassim, a resident who helped carry the victims, said he saw 40 dead and as many injured. Local radio put the toll at 50 or more.

Survivors gathered what possessions they could and set off in search of safe housing. "My husband is dead," one woman cried, carrying a bundle on her head and leading a small boy.

Nigerian President Olusegun Obasanjo flew in from the capital of Abuja to visit the blast site. Obasanjo had no comment.

Lagos state Gov. Bola Tinubu said his government will begin an investigation into the blast and he promised free medical treatment for the injured.

Lagos Island is one of two islands that, with the mainland, make up this city of 12 million. Nigeria is Africa's most populous nation, with 120 million people.

On Jan. 27, 2002, a series of explosions at an army munitions depot in Lagos killed more than 1,000 people. Hundreds of them drowned after jumping into a canal to escape the blast.