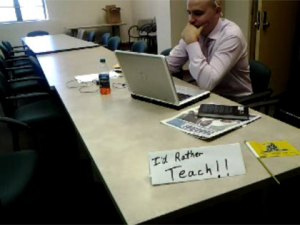 NEW YORK A New York City teacher who was removed from the classroom is streaming live video of himself pushing papers.

Francesco Portelos has been blogging about his battle with the city Department of Education since he was removed from Intermediate School 49 on Staten Island in April.

He's streaming from the office where he must sit and wait for his disciplinary hearing.

Portelos says he is being punished because he accused his principal of financial misconduct. No charges have been lodged against the principal.

Department of Education officials would not describe the charges against Portelos.

Department spokeswoman Connie Pankratz said all teachers who have been removed from the classroom are working "in an administrative capacity."

The video shows Portelos looking at a laptop in what appears to be an empty conference room, CBS New York reported. On the table, facing the camera, is a "Don't Tread on Me" flag and a sign that reads, "I'd Rather Teach!!"

"It's just crazy, I never thought this would happen, especially in the New York City Department of Education," Portelos told CBS Radio station 1010 WINS. "A $24 billion budget and I'm being paid $75,000 to sit here. It's ridiculous."