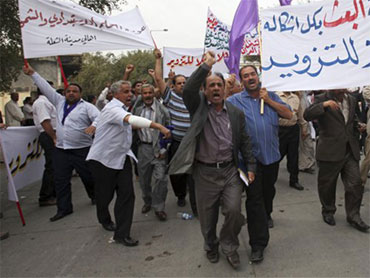 Bangladesh will need food aid for 20 million people — or one-seventh of its population — over the next five months because of massive flooding that has destroyed crops, the country's disaster minister said Tuesday.

The worst monsoon rains and flooding in six years have covered 60 percent of this nation of 140 million since June, destroying crops and jobs, said Food and Disaster Management Minister Chowdhury Kamal Ibne Yusouf.

"We are getting international assistance in addition to our own food stocks," he said. "No one will die from starvation."

The U.N. World Food Program said it is giving much-needed food supplies to nearly 2 million people and plans to launch a major emergency operation for millions more victims with help from other donor agencies.

"We are getting strong indications that donors are prepared to be generous," said Douglas Casson Coutts, the WFP representative in Dhaka.

Coutts warned that more flooding was likely for Bangladesh in the coming weeks, as fresh rains will be unable to drain into the waterlogged ground. "What we have seen so far is as bad as any floods in Bangladesh have been. But there may be worse to come, and we need to be ready," he said.

As waters began to recede in some areas, diseases have spread, adding almost daily to the country's casualties. The death toll rose to 628 late Tuesday, with 39 more deaths reported — nine of them from diarrhea, a spokesman at the Disaster Management Ministry said.

The deaths in Bangladesh are more than a third of the 1,580 people who have died across South Asia since mid-June in the annual monsoon rains and floods, surpassing last year's total of 1,500.

The U.N. Children's Fund launched an appeal Tuesday to raise $13.4 million to save tens of thousands of lives.

"Bangladeshi children living on the edge urgently needed attention to save them from the worst ravages of the floods," said a UNICEF statement.

At a relief center in Dhaka's Badda district, Amena Begum received 4.4 pounds of rice on Tuesday. "I've got something to eat, but my five-month-old daughter has nothing to eat. They don't give milk for babies here," said Amena, who worked as a housemaid before the floods.

Diarrhea, dysentery and typhoid have affected more than 100,000 people and killed at least 60, mostly children, government officials have said.

Police recovered the nine bodies and rushed the injured to hospital near the Tehri power project in Uttaranchal state, nearly 165 miles northeast of New Delhi, PTI quoted officials as saying.

Another five people died Tuesday when the roof of their house collapsed on them near Ahmadabad, an industrial hub of western Gujarat state, police said, bringing the death toll in India to 873.

Disease and property damage have added to the misery of millions of people still huddled in shelters or stranded in their flooded homes, while the waters slowly recede in many parts of South Asia.

"Our house is still under water and we don't know how soon we will be able to return home," said Motahar Hossain, a poor farmer living in a crammed shelter in Dhaka's Kamalapur district with his wife and four children.

In Bangladesh, a six-member U.N. team had assessed flood damage and the country's need for aid and was to meet government officials and foreign diplomats in Dhaka on Wednesday.

Dhaka's International Center for Diarrheal Disease and Research is treating an average 600 patients a day.

"Usually we get 200 to 250 patients daily during the monsoon season, but the floods have almost trebled the numbers this year," said Dr. Shahadat Hossain.

Water levels began to drop late last week, but many of Bangladesh's 250 rivers are still flowing above flood levels and drainage into the Bay of Bengal is slow, the Flood Forecasting and Warning Center said.

Sewage outlets are blocked in Dhaka and the filthy floodwater that has covered nearly 40 percent of the capital could take another few days to drain, the Water and Sewerage Authority said.
By Farid Hossain