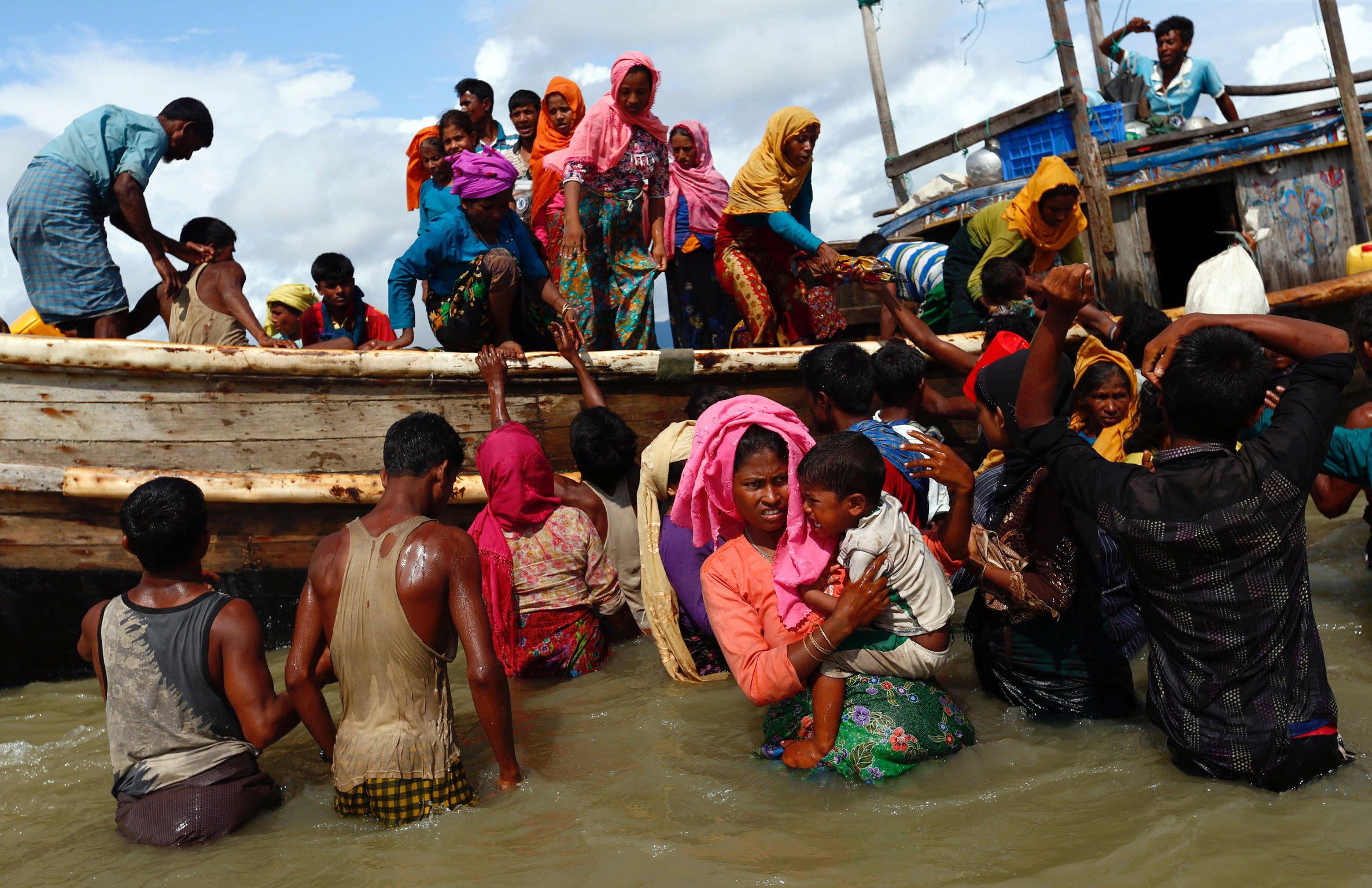 UKHIYA, Bangladesh -- The U.N. International Organization for Migration said Tuesday that the number of Rohingya refugees who have fled violence in Myanmar to Bangladesh has risen to 370,000 since August 25, the Reuters news agency reported. It was previously estimated that 310,000 members of the Muslim minority group had fled restive Rakhine state.

The Bangladeshi prime minister on Tuesday visited a struggling refugee camp that has absorbed some of the hundreds of thousands of Rohingya. Prime Minister Sheikh Hasina demanded that Myanmar "take steps to take their nationals back," and assured temporary aid until that happened.

"We will not tolerate injustice," she said at a rally at the Kutupalong refugee camp, near the border town of Ukhiya in Cox's Bazar district.

On Monday night, she lambasted Buddhist-majority Myanmar for "atrocities" that she said had reached a level beyond description, telling lawmakers she had "no words to condemn Myanmar" and noting that Bangladesh had long been protesting the persecution of Rohingya Muslims.

At least 313,000 Rohingya have flooded into Bangladesh since Aug. 25, when Rohingya insurgents attacked police posts, prompting Myanmar's military to retaliate with what it called "clearance operations" to root out the rebels.

The crisis has drawn sharp criticism from around the world. The U.N. human rights chief said the violence and injustice faced by the ethnic Rohingya minority in Myanmar - where U.N. rights investigators have been barred from entry - "seems a textbook example of ethnic cleansing."

"The Myanmar government should stop pretending that the Rohingya are setting fire to their own homes and laying waste to their own villages," Zeid Ra'ad al-Hussein said Monday in Geneva, calling it a "complete denial of reality."

Meanwhile, a Rohingya villager in Myanmar said security forces had arrived Monday in the village of Pa Din, firing guns, setting new fires to homes and driving hundreds of Rohingya to flee.

"People were scared and running out of the village," the villager said, speaking on condition of anonymity out of fear for his safety.

Myanmar police disputed that, saying the houses were burned by terrorists they called Bengalis. That term is used derisively by many in Myanmar to describe the Rohingya, who they say migrated illegally from neighboring Bangladesh, though many Rohingya families have lived in Myanmar for generations.

Bangladesh has said it would free 2,000 acres of land for a new camp in Cox's Bazar district, to help shelter newly arrived Rohingya. The government was also fingerprinting and registering new arrivals.

Kutupalong and another pre-existing Rohingya camps were already beyond capacity. Other new arrivals were staying in schools, or huddling in makeshift settlements with no toilets along roadsides and in open fields.

Aid agencies have been overwhelmed by the influx of Rohingya, many of whom are arriving hungry and traumatized after walking days through jungles or being packed into rickety wooden boats in search of safety in Bangladesh.

Many tell similar stories - of Myanmar soldiers firing indiscriminately on their villages, burning their homes and warning them to leave or to die. Some say they were attacked by Buddhist mobs.

At least three Rohingya have been wounded in land mine blasts, and dozens have drowned when boats capsized during sea crossings.

One 15-year-old boys lost both legs after stepping on a landmine, BBC News reported. His wounds were so grave, and resources so stretched as the small hospital treating him, that he was not expected to survive.

Myanmar's authorities said more than a week ago that some 400 Rohingya - mostly insurgents - had died in clashes with troops, but it has offered no updated death toll since.

Rohingya have faced decades of discrimination and persecution in Myanmar and are denied citizenship despite centuries-olds roots in the Rakhine region.

Before Aug. 25, Bangladesh had already been housing more than 100,000 Rohingya who arrived after bloody anti-Muslim rioting in 2012 or amid earlier persecution drives in Myanmar.