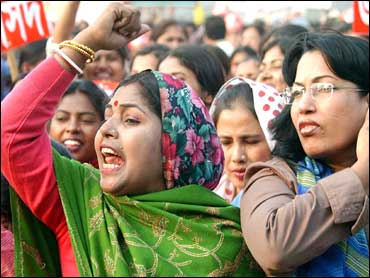 Bangladeshi police and soldiers arrested more than 2,500 people and raided the homes of several political leaders after a new caretaker government was sworn in to quell deadly unrest ahead of elections, police and news reports said Saturday.

The arrests came after the president on Thursday declared a state of emergency, delayed elections, and stepped down as head of a caretaker government to end street demonstrations alleging the upcoming vote was rigged.

On Friday, President Iajuddin Ahmed swore in respected economist Fakhruddin Ahmed to replace him as head of the country's caretaker government, mandated to steer the nation through elections. The president said balloting has been deferred from the scheduled Jan. 22 date.

A 19-party political alliance led by a former prime minister, Sheikh Hasina, had threatened to boycott and disrupt the vote unless the president stepped aside as the head of the caretaker government and election reforms were put in place.

Election Commission official Mihir Sarwar Murshed told reporters Saturday that the commission has suspended all election-related activities. He did not elaborate.

Soon after the new caretaker government chief was appointed, the alliance withdrew a planned series of transport blockades and strikes.

The Prothom Alo newspaper reported authorities detained some local politicians throughout Bangladesh, but no prominent leaders were arrested.

Troops and police also raided the homes of some political leaders' aides suspected of criminal activities or corruption, but made no arrests, the newspaper said.

The politicians were from both sides of the election dispute, the newspaper said.

Police said Saturday a former lawmaker, Kamal Majumder, was arrested the day before and has been jailed in the capital.

Soldiers arrested him at his Dhaka home, said police official Jasim, who uses only one name. Jasim would not name the charge. Majumder belongs to the Awami League party, a key force behind the election protests.

No new date has been set for the elections, and fears remained of further turmoil in a country with a history of coups, military rule and violently bitter democratic politics.

A four-party coalition led by former Prime Minister Khaleda Zia, meanwhile, said it hoped that the emergency would be temporary and the new caretaker administration would take steps soon to transfer power to an elected government.

"I hope all necessary steps will be taken as early as possible to hand over power to people's elected representatives in the interest of continuing democratic governance," coalition spokesman Abdul Mannan Bhuiyan said in a statement Friday.

At least 34 people have been killed in the often violent protests that started in October over the alleged attempt by the previous government, headed by Zia, to stack the Election Commission and rig polling lists.

The protests have crippled the country's economic and political process.

The new head of the caretaker government , Fakhruddin Ahmed, a former World Bank official, selected five advisers Saturday to help him run the country through to the next general elections, state-run television said.

President Ahmed, who still remains the country's mostly ceremonial head of state, swore in the advisers, who include ex-army and government officials, businessmen and a newspaper owner, Bangladesh Television said.

The new leader was expected to appointed five other advisers soon.