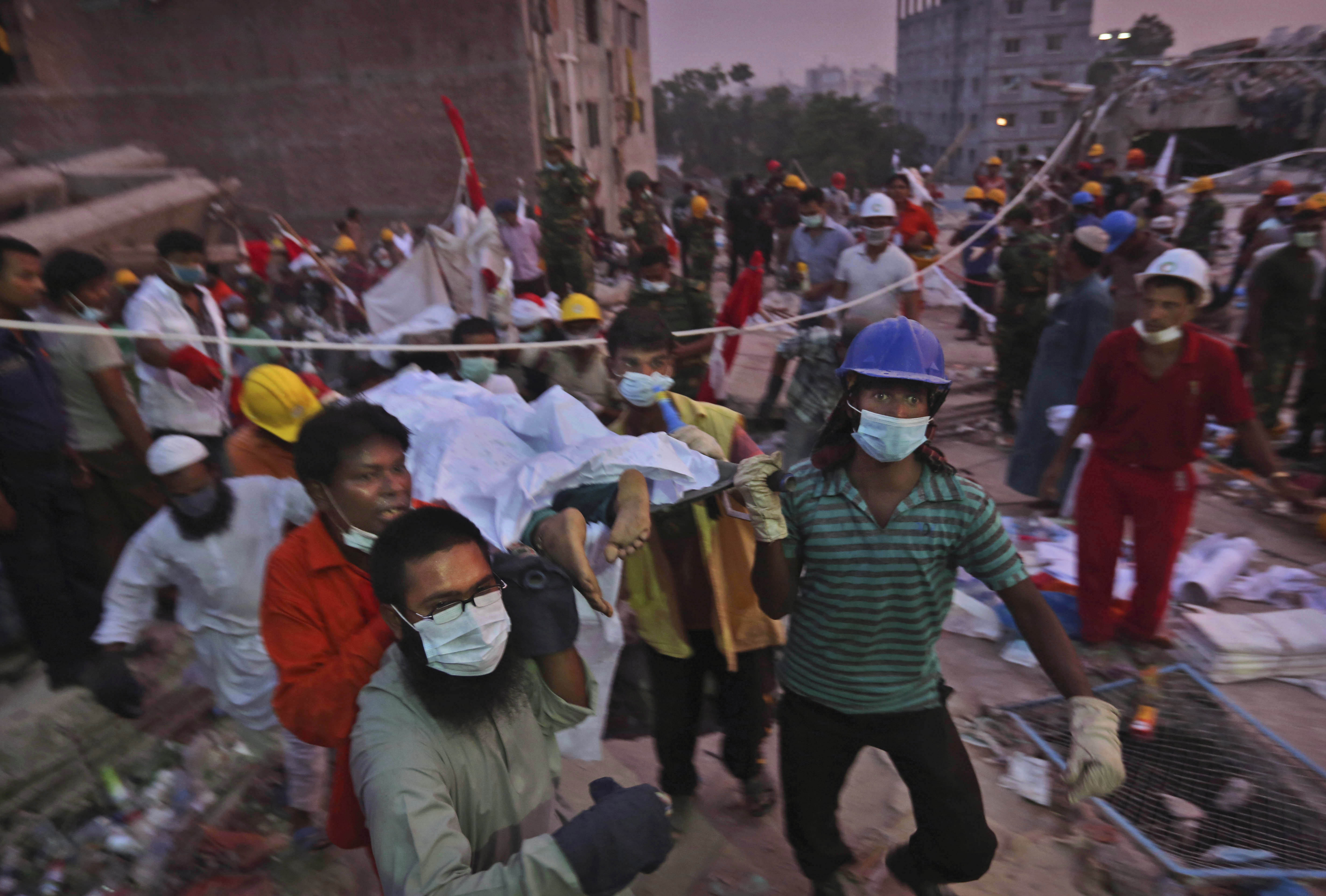 SAVAR, Bangladesh Police in Bangladesh took six people into custody in connection with the collapse of a shoddily-constructed building that killed at least 348 people, as rescue workers admitted Saturday that voices of survivors are getting weaker after four days of being pinned under the increasingly unstable rubble.

Still, in a boost for the rescuers, 29 survivors were pulled out Saturday, said army spokesman Shahinul Islam.

Most of the victims were crushed by massive blocks of concrete and mortar falling on them when the 8-story structure came down on Wednesday morning — a time many of the garment factories in the building were packed with workers. It was the worst tragedy to hit Bangladesh's massive garment industry, and focused attention on the poor working conditions of the employees who toil for $38 a month to produce clothing for top international brands.

Among those arrested Saturday were two owners of a garment factory, who a Dhaka court ruled can be questioned by police for 12 days without charges being filed. Also detained are two government engineers and the wife of the building owner, who is on the run, in an attempt to force him to surrender. Late Saturday, police arrested another factory owner. Violent public protests continued sporadically in Dhaka and spread to the southeastern city of Chittagong where several vehicles were set on fire.

Working round-the-clock since Wednesday through heat and a thunderstorm, rescuers on Saturday finally reached the ground floor from the top of the mountainous rubble through 25 narrow holes they have drilled, said Brig. Gen. Ali Ahmed Khan, the head of the fire services.

"We are still getting response from survivors though they are becoming weaker slowly," he said, adding that rescue workers were now able to see cars that were parked at the ground level.

"The building is very vulnerable. Any time the floors could collapse. We are performing an impossible task, but we are glad that we are able to rescue so many survivors." He said the operations will continue overnight as chances fade of people surviving for a fifth day with possibly grievous injuries and the heat.

The building site was a hive of frenzied activity all day with soldiers, police and medical workers in lab coats working non-stop. Rescuers passed bottles of water and small cylinders of oxygen up a ladder leaning against the side of the building to be given to possible survivors inside.

They used bare hands and shovels, passing chunks of brick and concrete down a human chain away from the collapsed structure. On the ground, mixed in the debris were several pairs of pink cotton pants, a mud-covered navy blue sock and a pile of green uncut fabric.

Nearby, Abul Basar wept as he awaited news of his wife, who worked in one of the garment factories. "My son says that his mother will come back some day. She must return! " he cried.

Every once in a while a badly decomposed body would be brought out, covered in cloth and plastic, to a spot where ambulances were parked. Workers furiously sprayed air-fresheners on the bodies to cover the stench, leaving the air thick with the smell of death and cheap perfume.

The bodies were kept at a makeshift morgue at the nearby Adharchandra High School before being handed over to families. Many people milled around at the school, waving photos of their missing loved ones.

Authorities are still searching for Rana, a local politician, who hasn't been seen publicly since the building collapsed. Negligence cases have been filed against him. Police in Bangladesh often detain relatives of missing suspects as a way to pressure them to surrender.

Dhaka police superintendent Habibur Rahman said Rana was a local leader of ruling Awami League's youth front. His arrest, and that of the factory owners, was ordered by Prime Minister Sheikh Hasina, who is also the Awami League leader.

Police said they detained for questioning two engineers working for the Savar municipality, Imtemam Hossain and Alam Ali. They did not say what role they played in approving the design of the building but it was clear that the arrests amounted to a widening crackdown. They spoke on condition of anonymity because they are not authorized to speak to the media.

A garment manufacturers' group said the factories in the building employed 3,122 workers, but it was not clear how many were inside it when it collapsed.

Police say they ordered an evacuation of the building on Tuesday after cracks in Rana Plaza were found, but the factories ignored the order and were operating when it collapsed the next day. Video before the collapse shows cracks in walls, with apparent attempts at repair. It also shows columns missing chunks of concrete and police talking to building operators.

Officials said soon after the collapse that numerous construction regulations had been violated.

The disaster is the worst ever for the country's booming and powerful garment industry, surpassing a fire five months ago that killed 112 people and brought widespread pledges to improve worker-safety standards. Since then, very little has changed in Bangladesh, where low wages have made it a magnet for numerous global brands.

Bangladesh's garment industry was the third largest in the world in 2011, after China and Italy, having grown rapidly in the past decade. The country's minimum wage is the equivalent of about $38 a month.