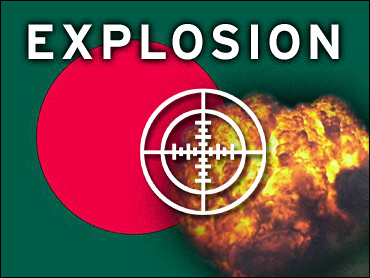 A bomb exploded at a Muslim shrine in northeastern Bangladesh on Friday, killing two people. The British ambassador was among dozens wounded, police and witnesses said.

British High Commissioner Anwar Choudhury was taken to Osmani Medical College Hospital in Sylhet. Doctors were reported as saying his condition was not serious.

No one claimed responsibility for the blast, which also killed two Bangladeshi men and injured more than 100 other people, including senior government officials, police and media reports said.

In London, British Foreign Secretary Jack Straw said he was "shocked" by the attack. "Details of exactly what happened and nature of the injuries are not clear," Straw added.

An army helicopter was being readied to bring Choudhury to the capital, private TV station ATN Bangla said.

The blast occurred during noon prayers at the Hazrat Shahjalal shrine in Sylhet, 120 miles northeast of the capital Dhaka, a police official said on condition of anonymity.

Choudhury, a 44-year-old Bangladeshi-born Briton, was visiting the shrine after assuming his post last week.

In January, a bomb killed five worshippers at the shrine. Police had no suspects despite questioning more than 20 people detained after the blast.