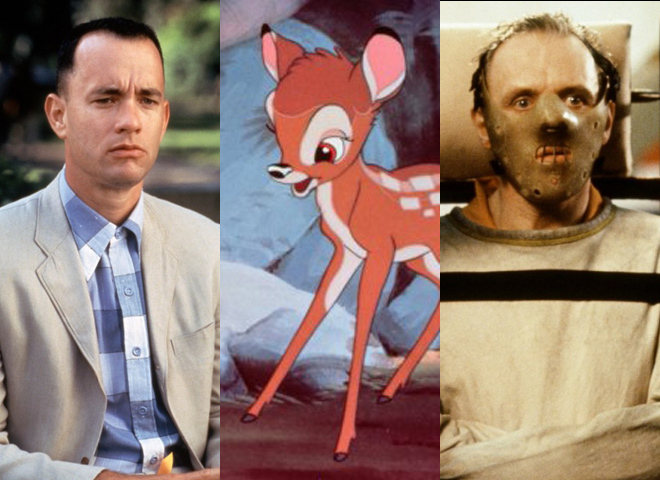 What do a mentally challenged Everyman, a cannibalistic serial killer, a cartoon deer, and a struggling alcoholic have in common? They have all been deemed worthy of preservation for future film audiences by the Library of Congress.

The Library today announced 25 additions to the National Film Registry, a repository of motion pictures judged to be culturally, historically or aesthetically significant.

This year's additions include three Academy Award-winners for Best Picture: Billy Wilder's "The Lost Weekend," starring Ray Milland as a writer fighting to overcome his alcoholism; "The Silence of the Lambs," featuring Anthony Hopkins' mesmerizing performance as Hannibal Lecter; and "Forrest Gump," in which Tom Hanks' character takes a picaresque journey through recent American history.

Also named to the Registry: Walt Disney's heart-tugging animated feature "Bambi"; John Cassavetes' "Faces," a triumph of indie filmmaking and acting; the 1950s sci-fi spectacle "War of the Worlds"; and a 1972 computer-generated animation of a human hand created by a graduate student who would later found Pixar.

Not simply a "best of" list, the Registry is meant to focus attention on movies that capture an ever-changing America. In addition to timeless Hollywood studio productions like "Citizen Kane," "The Wizard of Oz," "Some Like It Hot " and "Star Wars," the Registry includes experimental films and animation, documentaries and newsreels, music videos, movie ads, and 8mm and 16mm amateur films.

"These films are selected because of their enduring significance to American culture," said Library of Congress James Billington. "Our film heritage must be protected because these cinematic treasures document our history and culture and reflect our hopes and dreams."

Under the National Film Preservation Act that created the National Film Registry, the Library of Congress works with studios and archives to make sure copies of movies named to the Registry are protected and preserved for future generations.

This is crucial because more than half of motion pictures produced before 1950, including as much as 90 percent of films from the silent era, are lost - their negatives discarded, destroyed by fire, or deteriorated into dust. The fading of color film stocks has also imperiled movies dating from the 1950s through the '70s. Also needing special attention are "orphan" films - movies made outside the studio system which have not been preserved in studio vaults or which have fallen out of copyright.

Among the films added this year are home movies by the celebrated dance team the Nicholas Brothers; dramas supporting social reform movements, from a 1912 melodrama attacking child labor to 1979's "Norma Rae"; and the first great John Ford western, 1924's "The Iron Horse."

This year's 25 additions bring the total list of Registry titles to 575.

A documentary about the National Film Registry, "These Amazing Shadows," will air nationally Thursday, Dec. 29 as part of the PBS series "Independent Lens." The film is also available on DVD and Blu-ray through the Library of Congress (www.loc.gov/shop).

"Bambi" (1942) - Producer Walt Disney and director David Hand beautifully capture the lushness of Nature, as well as the very real threats facing the young protagonist deer - from fire and from human hunters. The shooting death of Bambi's mother affected more than one generation.

"A Computer Animated Hand" (1972) - Using digital points on a model hand digitized into a computer to produced polygons, University of Utah graduate students Ed Catmull and Fred Parke produced what is believed to be the first computer-generated 3D-rendered animation of a human hand. Catmull would go on to found the animation company Pixar, and is currently the president of Walt Disney Animation Studios and Pixar Animation Studios.

"Crisis: Behind A Presidential Commitment" (1963) - A fly-on-the-wall documentary about the confrontation between President John F. Kennedy and Gov. George Wallace over the enrollment of two African-American students at the University of Alabama.

"The Cry of the Children" (1912) - This two-reel melodrama, partially shot at a working textile factory, captured the terrible working and living conditions of children working in mills, and was one of a wave of films created in support of the anti-child labor movement in the United States.

"A Cure for Pokeritis" (1912) - John Bunny was an early film star noted for gentle comedies of domestic strife. Though most of his prodigious output has not survived, "Pokeritis" is a prime example of Bunny's work - here as a husband whose wife plots to put an end to his card-playing.

"El Mariachi" (1992) - Robert Rodriguez famously shot this indie thriller about a guitar-case toting gunslinger (and the guitarist mistaken for him) for about $7,000.

"The Iron Horse" (1924) - With a realism and sweep far ahead of other westerns at the time, John Ford's epic helped establish his reputation as one of the medium's greatest directors - certainly as the owner of the genre that became inseparable from his name.

"The Lost Weekend" (1945) - Winner of Academy Awards for Best Picture, Best Director (Billy Wilder) and Best Actor (Ray Milland), "The Last Weekend" tackled the horrific effects of alcoholism with a documentary-like clarity as well as a disturbingly impressionistic take of Milland's haunted point of view.

"Nicholas Brothers Family Home Movies" (1930s-40s) - 16mm footage of the celebrated dance team Fayard and Harold Nicholas capture not just their stage magic (including the only footage shot inside the Cotton Club) but also street life in Harlem.

"Porgy and Bess" (1959) - Otto Preminger's film adaptation of the Gershwins' folk opera, with an all-star cast that featured Sidney Poitier, Dorothy Dandridge, Sammy Davis, Jr., Pearl Bailey, and Diahann Carroll, has been screened rarely in recent years owing to rights issues, and has never been released on home video or DVD.

"The Silence of the Lambs" (1991) - Anthony Hopkins' murderous psychiatrist Hannibal Lecter begrudgingly teamed up with green FBI agent Jodie Foster to locate a serial killer suspected in the kidnapping of a Senator daughter. Masterfully acted and edited, the film was a rarity: A horror movie that won an Oscar for Best Picture. A horror movie!

"Stand and Deliver" (1988) - Based on the true story of Los Angeles math teacher Jaime Escalante, Edward James Olmos delivered an Oscar-nominated performance as a teacher who inspires his underprivileged students to excel at calculus.

"War of the Worlds" (1953) - A fondly-remembered example of 1950s science fiction, George Pal's colorful adventure updated H.G. Wells' 1898 novel of an alien attack to the Cold War, mixing in religious metaphors with its clash of civilizations and an invading force brought down not by atomic weapons but by microbes.