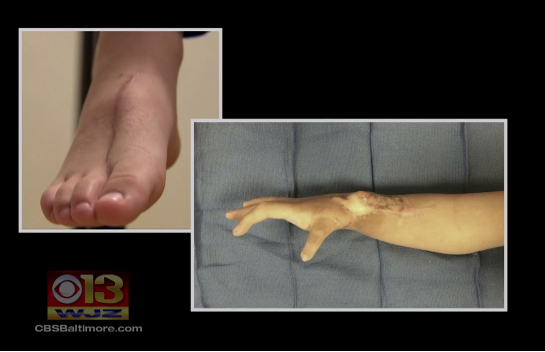 BALTIMORE -- Lal Ding was born with radial club hand, a genetic condition that left him without a thumb, CBS Baltimore reports. He also has a shortened forearm, which causes his right hand to curve sharply toward his wrist.

Dr. Ryan Katz of The Curtis National Hand Center at MedStar Union Memorial Hospital said that when he first met Ding, “he had already had a surgery to reposition his index finger to the thumb position, and the parents wanted to know if there was anything we could do to straighten the hand and allow him to continue to grow.”

Katz and a team of doctors discovered an innovative procedure that takes a bone, joint and growth plate from Ding’s foot to create a functioning hand and arm.

“I have always been drawn to complex reconstructive cases,” Katz said. “For me, it brings me satisfaction to see difficult problems solved. I love seeing patients who think there is no hope, or no alternative, be offered a potential solution to a complex problem.”

And that’s exactly what this surgery represented for 8-year-old Ding and his family.

The micro-surgeon and architect of the groundbreaking technique flew from Finland to Baltimore to consult during the unprecedented eight-hour procedure.

“What we want to do is raise the toe, without injuring any of the other toes, while preserving its blood supply and preserving its growth plates and through a lengthy surgery, the toe comes up, it gets transferred to the forearm, and we fuse the bones together, release the clamps,” Katz explained.

The surgery required two teams -- one at Ding’s foot, the other at his hand. The “foot” team preserved the blood supply and growth plates, and raised Ding’s toe to the “hand” team. They then fused the bone to the forearm, creating a wrist joint.

Now, his hand is significantly straighter than it was before. While he still has a little angulation, he has a four-fingered hand with the index finger in the thumb position. He goes to physical therapy every week, learning how to use his wrist and fingers and building dexterity.

“I would love if his hand no longer draws unwanted attention and he can integrate well in class and society without unwanted stares,” Katz said. “I hope that with an improved hand posture and overall hand dexterity, he can do anything he wants to do.”