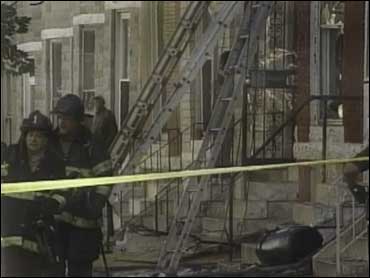 Fire engulfed a two-story row house Tuesday, killing at least six people believed to be members of an extended family and injuring seven others, authorities said.

Some of those killed were burned so badly that firefighters were unable to determine their age or gender, Fire Chief William Goodwin said. He described it as "the worst scenario I've seen in my 32 years."

CBS station WJZ-TV reports four people were critically injured — two adult women, an adult man and a three-year-old girl — and three other people had less serious injuries — a man, a woman and a four-year-old girl.

Neighbors said the family living in the home included small children and teenagers. All the victims were believed to be related, fire officials said.

The first firefighters to arrive found both floors engulfed in flames. They rescued three people, and three others managed to escape.

Goodwin said the heat from the fire was so intense that the victims died quickly.

Four of the victims who died were found in a second-floor bedroom, and a fifth was at the base of the stairs, Goodwin said. Another died on the way to a hospital.

Fire officials said they believed the blaze started on the first floor of the home. The cause was under investigation.

There was no evidence that the home had working smoke detectors, officials said.

Neighbor Sylvia Matthews said she was awakened by a 5-year-old girl who banged on her door and said the house was on fire. Another neighbor tried to enter the burning home from a rear door but was forced back by the heat, Matthews said.

The building's owner, O. Roosevelt Carlest, said he rented the home in October to a woman with two sons, including one who used a wheelchair. But Carlest said he was aware that a large number of people lived there. He said he had been trying without success to evict the family for not paying rent.

Arson is not suspected as the cause of the fire, but nothing has been ruled out, reports WJZ.

The home was in a low-income community of row houses near the historic Green Mount Cemetery, a city landmark.