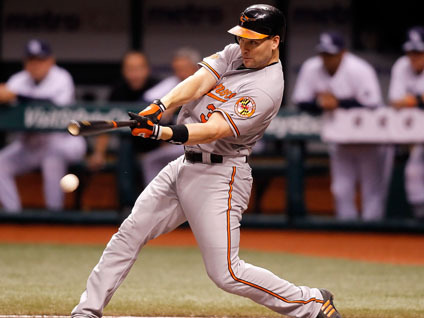 Baltimore Orioles slugger Luke Scott slammed Barak Obama as being out of step with American values and challenged the president's claim to United States citizenship.

In a wide-ranging interview that appears today on Yahoo Sports, Scott said that Mr. Obama did not represent "anything what our forefathers stood for."

"This country is basically built on an attitude. It's a way of life. ... Obama, he doesn't represent that. He represents, "Hey, everyone. Give me votes and I'll give you stuff," Scott said.

Scott, a 32 year-old outfielder for the Orioles who cracked 27 home runs and knocked in 72 runs during the regular season, later declared in the interview that the president was hiding the truth about the circumstances of his birth.

"He was not born here...If someone accuses me of not being born here, I can go -- within 10 minutes -- to my filing cabinet and I can pick up my real birth certificate and I can go, "See? Look! Here it is. Here it is." The man has dodged everything. He dodges questions, he doesn't answer anything. And why? Because he's hiding something."

"I look at Ted Nugent and ... he's an American. He has the core beliefs of what it means to be an American in his heart. He lives by those beliefs and those principles. It's the same beliefs that our forefathers, who fought for our country, have. I'd be real interested in meeting him one day."

Among other insights, Scott disclosed he's a huge fan of the movie "Braveheart" - "It's a great movie, one of my all-time favorites" - and that he makes his own deer jerky.

A spokesman for the Baltimore Orioles was not immediately available for comment.