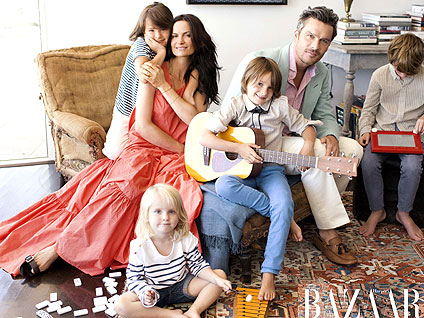 NEW YORK (CBS) Balthazar Getty and his wife, Rosetta, opened up about the actor's public affair with Sienna Miller.

The two told the Harper's Bazaar that their family, which consists of four young children, is now happily back on track.

"Here's the bottom line: It was a very challenging time for everybody involved," said Balthazar, 35, "but I loved and missed my family too much not to make it work. Rosetta is understanding enough and spiritual enough to let us try. In a way it--I don't know ...I feel like we're better than we've ever been."

"I'm open to talking about it because I believe we go through things in a public way to help other people get through it. I'd love to talk about it more with people when I'm clearer about it," she says. "I'm going to have to explain this to my daughters one day. I chose not to act from ego because I just felt like it would be too crushing for my children."

The happy-again couple posed in their Los Angeles home for photographs for Harper's Bazaar with their kids Cassius, Grace, Violet and June.