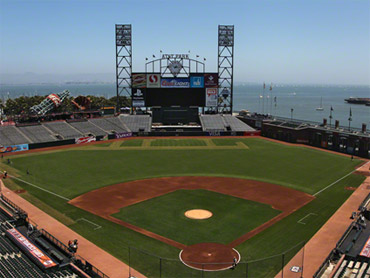 This story was written by CBSNews.com's Gordon Donovan, long-suffering Mets season-ticket holder and author of the blog Meet the Mess

I went to several baseball games in San Francisco when the Giants played at Candlestick Park. The last game ranks up there as one of the coldest I ever attended, surpassed only by opening day at Yankee Stadium in 2003 (when the seats were covered in ice and snow.)

Now the Giants are playing in their newest home at AT&T Park. The ballpark has changed names several times and has been proclaimed as one of the best parks in baseball by many people I meet. Opened in 2000, AT&T Park is just up the bay, 6 miles north from Candlestick in the South Beach section of San Francisco.

The area around AT&T is decorated with banners featuring Giant players and slogans "It's Hot Inside" and "Its Magic Inside." Bars and restaurants are nearby on 3rd Street and Willie Mays Plaza.

As I arrived at the ballpark I was shocked to see how many fans were waiting outside 6 hours before game time. I've seen this crazy fan behavior only in Boston and Chicago. People were waiting in line to receive a Tim Lincecum bobblehead give-away that day. Another line was for season ticket holders to meet and greet the Cy Young Award winner.

The first order of business was to take a tour of the park. I had some time to kill so I walked around the exterior of the park, seeing statues of Giants greats and plaques honoring other Giants stars on the walls of Willie Mays Plaza. The area in right field is beautiful with the marina, McCovey Cove and the Portwalk, which had a knothole-like area where passersby can watch a game for free for a limited time. Around the Portwalk, great moments in Giants history are engraved in the walkway.

The tour was one of the best I've ever been on. The tour leader was knowledgeable and asked trivia about the team and baseball history. We were taken on the field, inside the dugouts, into press area, luxury suites and to the upper level behind home plate to see the great view of the San Francisco Bay.

The interior of the ballpark is decorated with images of the team history and also offers a history of the San Francisco seal.

I attended two games there to see the Giants take on the Mets. I wore Mets gear one game and just a plain t-shirt the following day. I found the staff pleasant and good natured despite rooting for the visiting team.

I had seats behind home plate for the first game and the club area I entered in was filled with the smell of garlic fries. I had the chicken fingers, garlic fries and ice tea for $14.25. Garlic fries are to be shared with others. They were potent, but good.

Judging from the tour and walking around the park before the game time, there's really not a bad seat in the house. I asked an usher if I could walk around and take photos. One usher replied, "Sure if don't climb over anyone." The staff was kind and very friendly. Once the game started, ushers held up signs requesting people to show their tickets. One sign read: "As a courtesy to our guests, please wait. Batter in box." Some other organizations should take notice.

As I walked around the entire park and took photos, I received hellos from staff and other fans asking me if I liked the park and if I came in from New York for the game. The view of the bay was amazing. At the Coca-Cola Fan Lot is in left field, the world's largest baseball glove attracts throngs of kids. That area was too crowded to get through.

A large food court is in centerfield with a variety of foods. In right field is an old cable car as well as a sign post marker: the Polo Grounds are a mere 2,925 miles away.

The seats behind home plate were disappointing because a door leading to the field had plexiglass that was scratched and cloudy. It was bad for viewing for the game but even worse for taking photos.

I was surrounded by good-natured Giants supporters and real baseball fans. They knew baseball and loved the Giants, unlike most fans you see on TV in the expensive seats behind home plate.

As the Mets were getting clobbered, two younger fans a couple of rows in front of me tried to rub salt in my wounds. I asked if they'd like to see a photo of me with two World Series trophies. The guys next to me laughed and enjoyed chatting baseball. It was one of the rare times in my life I had the upper hand involving my team.

Some guys sitting next to me tried to leave early to beat the traffic, but came back to their seats when the Mets started to rally in the 9th. Their return squashed New York's rally and one fan apologized for the Giants 8-4 win. As I left, I gave a young fan who did not receive a bobble head the one I received.

The following day, the 42,000-seat ballpark was nearly sold out again for a beautiful sunny 67 degree game. This day, I sat 10 rows behind the visitors' dugout with transplanted New Yorkers with mixed loyalties and a father and his sons who flew in for the game. These seats were great, providing an amazing view of the park and field.

That game featured a pitching duel between the Mets Johan Santana and the Giants Jonathan Sanchez.

Santana had the upper hand and pitched 8 strong innings - only to see Francisco Rodriguez blow his fifth save of the year. Home-plate umpire Phil Cuzzi made some questionable calls and then shouted at Rodriguez who seemed upset by his calls. As the Giants tied the game in the bottom of ninth, the Mets got a favorable call on a close play at the plate to end the Giants rally.

Ike Davis doubled home Jason Bay in the 10th to give the Mets a 4-3 win, as K-Rod shut down the Giants in the 10th for the win. As the umpires left the field, the Giant fans gave Cuzzi the business.

When in San Francisco, see the Golden Gate Bridge, take a ride on cable car, visit Alcatraz Island and take in a game at AT&T Park, one of best ballparks in all of baseball.