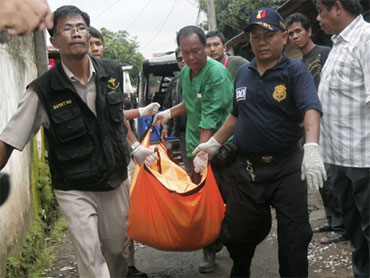 A top-ranked Southeast Asian militant wanted for planning the deadliest terrorist attack in Indonesia's history has been killed in a shootout with police at an Internet cafe, the president confirmed Wednesday.

Dulmatin, a 39-year-old Indonesian trained by al Qaeda in Afghanistan who goes by one name, was wanted for the suicide bombings that tore through two Bali nightclubs popular with Westerners in 2002, killing 202 people.

He has been one of Southeast Asia's most wanted fugitives and was thought to have fled to the Philippines.

President Susilo Bambang Yudhoyono used a speech to officials in the Australian capital of Canberra on Wednesday to confirm speculation that Dulmatin was one of three suspected militants killed in two coordinated raids the day before on Jakarta's southwestern outskirts on the country's main island of Java.

"Today we can announce to you that after a successful police raid against the terrorist hiding out in Jakarta yesterday that we can confirm that one of those that were killed was Mr. Dulmatin, one of the top Southeast Asian terrorists that we've been looking for," Yudhoyono said in a luncheon speech in Parliament House.

Eliminating the alleged master bomb maker of the Jemaah Islamiyah militant group, a Southeast Asian offshoot of al Qaeda, will be seen as a major achievement for Indonesian security forces ahead of President Barack Obama's first visit to the country March 20-22. Terrorism in the region will be a major focus of talks.

It was not immediately clear if anyone is eligible for a $10 million reward offered by the US government for Dulmatin's capture.

Tuesday's raids were part of a police crackdown on a suspected Jemaah Islamiyah cell that recently established a paramilitary training camp in the western province of Aceh.

Police said the raids were based on information from about 20 suspected militants from Aceh and Java already in custody.