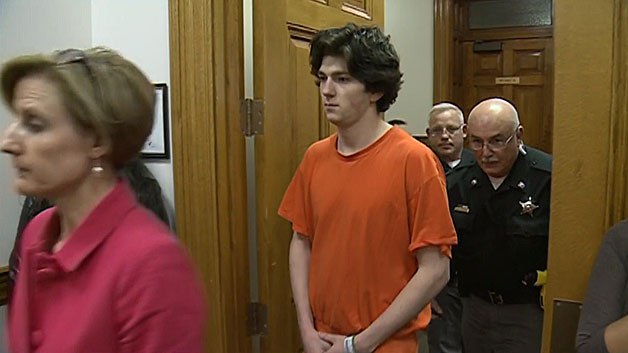 CONCORD, N.H. -- A judge has reinstated bail for a New Hampshire prep school graduate convicted of sexually assaulting a 15-year-old freshman girl as part of a game of sexual conquest called Senior Salute.

Merrimack County Superior Court Judge Larry Smukler ruled Monday that Own Labrie can be released on bail with the added condition that he wear a GPS monitoring bracelet. The 20-year-old had previously been free and living with his mother in Tunbridge, Vermont, as he appealed his sentence and the requirement that he register as a sex offender. He was supposed to be home between 5 p.m. and 8 a.m. each night, but a prosecutor said he violated that curfew at least eight times.

In court papers, prosecutor Catherine Ruffle said that on or about Feb. 29, a journalist spoke with the 20-year-old Labrie on a train in Cambridge, Massachusetts. That prompted an investigation into Labrie's travels.

A judge revoked his bail in March after Labrie admitted to violating the curfew. Labrie has been in jail since then. He appealed that decision to the state Supreme Court, which last week sent the matter back to the trial court.

Labrie was 18 when he was arrested in 2014, days after graduating from St. Paul's School in Concord, New Hampshire.

He testified that he and the girl had consensual sexual contact but denied having intercourse with her.

Monday, his lawyer Jaye Rancourt said that being in jail has been an "eye-opening" experience for Labrie, who she said has been scared for his safety while incarcerated, nervous and "bored at times." She said Labrie would be willing to comply with bail conditions set by the judge.

Rancourt said Labrie now knows "when you're given a a benefit from the court -- that benefit being that you're allowed your freedom -- that you don't take your freedom for granted."

"The only thing that's changed is that the defendant doesn't like being in jail," Ruffle said.

Labrie appeared in court in an orange jumpsuit and appeared to wipe his eyes at times. Smukler said Labrie "decided for himself whether it was appropriate to follow the rules or not."

"It's clear Mr. Labrie did breach the trust of this court, there's no question about that -- that's why his bail was revoked," Smukler said. "I am cognizant of the face that Mr. Labrie has spent two months incarcerated and that may have impressed the importance of compliance with him."

The earliest Labrie would be released is Wednesday, and the latest is Friday, prosecutors said.