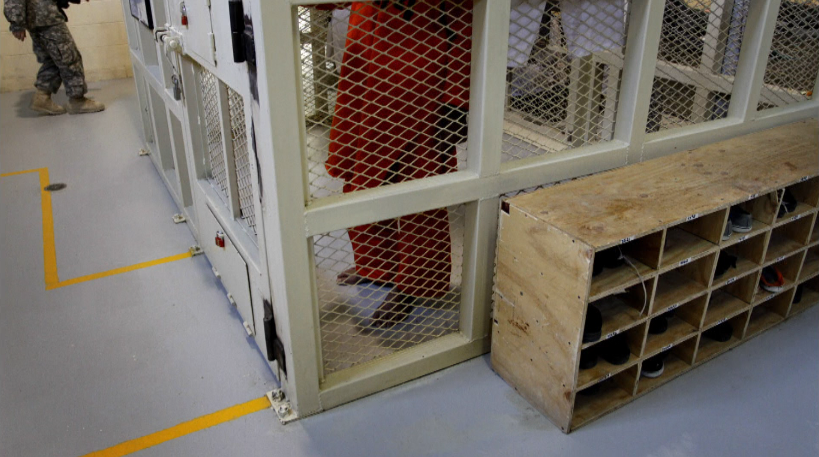 KABUL, Afghanistan - The former prisoner of the American military in his native Afghanistan entered the office leaning on a crutch. He said he had trouble walking after spending a year confined to a 35-square-foot jail cell at Bagram Air Base in Afghanistan, about an hour's drive north of the capital, Kabul.

He agreed to speak with us only if we kept his identity hidden. We agreed to call him just "Mohammed."

"Our cells were like cages," Mohammed spoke in Dari through a translator. "We couldn't see anything outside."

The cage-like cells for some Bagram detainees were part of a $60 million renovation in 2009. Mohammed, who was detained that June, believes disgruntled neighbors tipped U.S. troops about him following a land dispute. His family did not learn for six months why he had disappeared.

"Somebody had reported that I was helping the Taliban, which would be the last thing in the world I would do," Mohammed said. "I build this country. What Taliban are doing is destroying this country."

The Taliban is the militant Islamic group allied with al Qaeda that ran Afghanistan from 1996 through 2001, until it was toppled by the U.S. invasion.

Mohammed, a father of 10 children, said he is a trained engineer and educator who teaches girls. He said he would never support the Taliban, which was infamous for its oppression of women.

Mohammed said he never saw any evidence against him and did he not get an attorney. Instead, a U.S. military officer was appointed to represent him at status review hearings.

"I was innocent. I hadn't done anything wrong," Mohammed said. He was never physically mistreated, but he was woken up at all hours to be interrogated, he said.

Today, there are more than 3,000 detainees at Bagram, or five times the number (around 600) when President Barack Obama took office in January 2009. There are currently 18 times as many detainees at Bagram than at the U.S. military prison at the Guantanamo Bay, Cuba, naval base, whose prisoner population has dwindled from a peak of 780 to 170.

While Guantanamo has been the subject of legal wrangling and international controversy since the U.S. started sending terrorism suspects there in 2002, the explosive growth of the detainee population at Bagram has largely escaped international or domestic scrutiny.

When CBS NEWS asked to visit Bagram three months ago, the U.S. military first approved our visit, and then canceled it. Our request to interview any U.S. military official in Afghanistan or at the Pentagon about detainee procedures was rejected.

Neither William Lietzau, the Deputy Assistant Secretary of Defense for Detainee Affairs, nor Brigadier General Mark Martins, who oversaw detainee affairs in Afghanistan as the first commander of Joint Task Force 435, were available for an interview. Gen. Martins is now in charge of prosecutions at Guantanamo.

"It's worse than Guantanamo," Eviatar said in an interview, "because there are fewer rights."

Eviatar's report, "Detained and Denied in Afghanistan: How To Make U.S. Detention Comply With the Law," documented stories of detainees held from seven months to seven years.

"There was no evidence presented," she said, "there was no questioning of the government's evidence, whether this person had done anything wrong, whether he deserved to be in prison. So that's a real problem -- you have a complete lack of due process."

Unlike Guantanamo, the Department of Defense won't release the names of its Bagram detainees or its reasons for holding them indefinitely. Eviatar said Mohammed's story is typical.

When the ACLU sued the government two years ago for greater disclosure of Bagram prisoner names, citizenship, place of capture, and length of detention, DOD fought the suit and replied that even the criteria for detaining Afghans an "enduring security threat" is a state secret.

"We're not going to win this war by making enemies of the local population, and unfortunately sweeping people up and putting them in prison without a fair hearing makes enemies of the local population," Eviatar said. "And the problem with holding thousands of people, a large number of whom probably do not pose a danger, is that you create tremendous resentment among not only those people but their families, their extended families, their villages, the families they left behind who now don't have a bread winner."

The procedures for handling detainees at Guantanamo have evolved over a decade after extensive Supreme Court and Congressional review that has yet to be applied to Bagram.

The first, revamped "military commission" of an accused Al Qaeda terrorist began at Guantanamo this past week with the arraignment of Abd al-Rahim al-Nashiri, a Saudi accused of leading the October 2000 raft bomb attack on the U.S.S. Cole in Yemen, which killed 17 American sailors.

Al-Nashiri faces the death penalty when his commission resumes next November, with commissions for five Guantanamo prisoners accused of direct roles in the September 11th conspiracy to follow. Al-Nashiri's arraignment was open to the news media.

"The due process we are giving in Afghanistan is consistent with law of war due process," said U.S. Senator Lindsey Graham, a South Carolina Republican who sits on the Armed Services Committee.

Graham said in an interview he is satisfied with procedures that require every Bagram detainee to appear before a three officer panel every six months. An Air Force JAG and active reservist, Graham has sat on review boards during visits to Bagram.

"We're fighting people who are trying to topple the Afghan government and kill American forces. They're not common criminals; they're treated as an insurgent under the law of war," Graham said.

"The additional surge forces are taking the fight to the enemy, so captures are way up," Graham continued. "The more the Afghan people think we're winning and trust us, the more people we're going to capture. So the good news for our troops is that we got more people off the battlefield that were shooting at them last year."

A large number of detainees remain incarcerated simply because the war is not over, Graham said, adding that the goal is to transfer prisoners to Afghan control, eventually.

"Here's the dilemma for U.S. forces: you capture these people in the battlefield in a firefight. The local community tells you, 'this is the bad guy,' Graham said. "We're not going to turn him back over to an Afghan legal system that is full of corruption and doesn't have capacity."

Graham supports the Obama administration's plans to expand Bagram prison, which the military now prefers to call the prison the Detention Facility in Parwan (DFIP), referring to the Afghan province where it resides.

DOD is now reviewing bids from contractors to expand the facility to house up to 5,500 detainees. The project is expected to cost another $25 to $100 million when it is completed by the end of 2012.

Mohammed said he does not doubt there are true insurgents held at Bagram/DFIP, but he believes many men are unjustly held. His once-positive view of the U.S. has changed.

Editor's note 11/15/11: An earlier version of this post misstated the title of Brigadier General Mark Martins as "the commanding officer at Bagram until this fall." It has been corrected to read, "who oversaw detainee affairs in Afghanistan as the first commander of Joint Task force 435."
View CBS News In
CBS News App Open
Chrome Safari Continue
Be the first to know
Get browser notifications for breaking news, live events, and exclusive reporting.