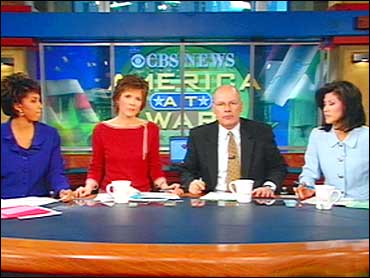 Even though there hasn't been much organized resistance in the southern part of Iraq, CBS News Correspondent John Roberts reports a lot of militia members - Saddam Fedayeen, as they're known, and jihadists, imported fighters from outside the country - are still very much a force in Iraq.

They could put the Marines and the Army under harassing fire and make it difficult to get control of these neighborhoods, not only in Baghdad but in other cities as well.

"This only marks the beginning of the next war in Iraq, and that's the dangerous part that we need to be concerned with," explains CBS News analyst Col. (Ret.) Mitch Michell to The Early Show anchors. "Those forces that aren't going to give up and go back to a normal way of life, that still hold the grudge, that still believe in Saddam's ideals and the ideals of the Baathist party will go into hiding, and they will come out as terrorists."

And in the nature of guerrilla war, the United States military may even have to loop back into some portions of southern Iraq and re-fight some of the battles that were scattered in pockets of the desert on the way up to Baghdad.

Roberts reports local council members wrote a letter to U.S. military leaders, saying, "Please don't leave us behind. Please provide security, because we're afraid that these bad guys will come back into the city and the nightmare will start all over again."

In cities like Umm Qasr and in Basra, there is a plan to provide security. But in many of these small towns and villages, there aren't.

Col. Mitchell says, "The problems that come in a leaderless society are many, and they have to be dealt with immediately, and the people who can deal with them the best at the moment are our military forces, still trying to fight the battle."

Iraq's ethnic mixture makes it hard as well to bring everyone under one accord. There are old animosities, Mitchell points out. There are the Kurds in the north; the Sunnis in mostly the central, upper central part of the country; and the Shiites predominating in the southern part of the country.

"The people who live in Saddam City, some two million of them, who have been repressed horribly by Saddam Hussein, what are they going to do against the Sunnis living in Baghdad?" Michell asks.

"We have to guard against some type of war in the city of Baghdad, and that's the last thing our military wants to get involved in. But in a leaderless society, you have no one to turn to control the population," he notes.

The second most important thing, he says, is maintaining the infrastructure; that is, "making sure that there is food and water and all the facilities they might need for five million people. You just don't turn that on or off. It's going to take some time to pull it together and an impatient population will just start doing what they need to do to survive, and that's where you have anarchy," Mitchell says.

But liberating the Iraqi people is not the only purpose of this war. Finding weapons of mass destruction is also critical.

CBS News analyst and former U.N. weapons inspector Stephen Black says, "We should never lose track of the fact that not only is the legal and diplomat justification for this war based around Iraq's failure to disarm, but also the No. 2 war objective, is to disarm Iraq of weapons of mass destruction."

And he says it is not going to be an easy task. The problem is that those weapons have been hidden in Iraq for many years. Iraqi people are key in leading coalition forces towards those sites, Black says.

He says the problem can be understood as a shell game. In the past, he explains, "there was somebody moving the shells around on the table, and the inspectors had to keep looking for that tiny little pea, the small weapons of mass destruction stocks, which, in importance, are quite large. But, physically, it's a fairly small thing you're looking for."

But once the country is secure, there is no longer a person moving the shells around. "So you've still got to go look under all the shells but nobody's actively hiding the weapons from you anymore. So it will make it a little easier a task," Black says.

So there is a need for the "Iraqis who were involved in hiding the weapons or manufacturing them or maintaining them " to come forward and point out the sites.