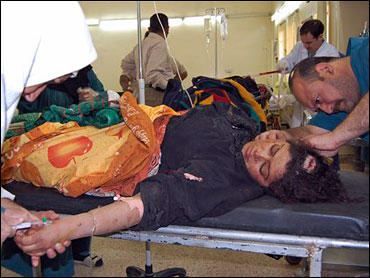 A car bomb exploded near a crowded market in a mainly Shiite area in Baghdad on Thursday, killing as many as 20 people, Iraqi officials said, in the fifth major attack in Iraq this month.

The blast came a day after the U.S. military said overall attacks nationwide have fallen to levels of the early months of the war, which began with the U.S.-led invasion in March 2003.

The car was parked near a bus terminal surrounded by shops in the eastern Shaab district when it blew up shortly after noon on Thursday, the officials said.

Iraqi police and hospital officials, speaking on condition of anonymity because they weren't authorized to release the information, said the 20 killed included four children and four women. The officials said 35 people also were wounded.

The U.S. military confirmed the attack but said preliminary reports indicated eight people were killed and 14 were wounded.

Conflicting casualty tolls are common in the chaotic aftermath of bombings.

Shaab is a former Shiite militia stronghold that has seen a sharp drop in violence since anti-U.S. cleric Muqtada al-Sadr declared a cease-fire amid a crackdown by the U.S. and Iraqi militaries.

But Baghdad and surrounding areas have seen a spike in bombings, raising concern that Sunni insurgents may be regrouping as the U.S. begins to hand over security responsibility to the Iraqis ahead of a planned American troop withdrawal by the end of 2011.

Thursday's attack came three days after a suicide bomber struck a Kurdish funeral in the northern town of Jalula, killing 27 people. Another bombing on Monday killed eight people in the Abu Ghraib area west of Baghdad.

A car bomb also tore through a livestock market in the Shiite city of Hillah on March 5, killing 13 people.

U.S. military spokesman Maj. Gen. David Perkins said Wednesday that attacks have fallen from an average of 1,250 per week at the height of the violence to many weeks that have seen fewer than 100.