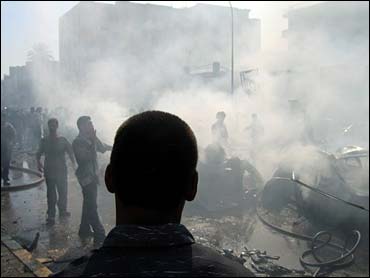 The strikes targeted mortar positions and sniper nests, in preparation for a ground assault on insurgents trapped in this part of the former militant stronghold.

A police captain at the scene of the Baghdad blast, speaking on condition of anonymity, said that the it had narrowly missed a U.S. convoy that passed by seconds before.

An Associated Press reporter on the scene saw five dead bodies in the rubble, including a decapitated corpse. Police said at least 17 people were killed.