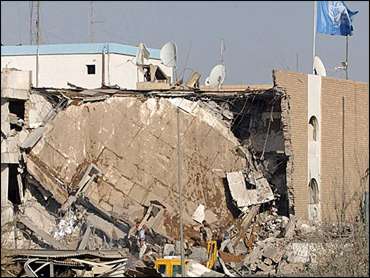 The FBI said Wednesday the deadly bomb that ripped through U.N. headquarters in Iraq was made from old munitions, including a single 500-pound bomb — all materials from Saddam Hussein's prewar arsenal that required no "great degree of sophistication" to assemble.

Hopes of finding survivors faded Wednesday afternoon, 24 hours after an explosives-rigged truck brought down the facade of U.N. offices in the Canal Hotel, killing at least 20 people including the top U.N. envoy in Iraq, Sergio Vieira de Mello. About 100 people were wounded.

A key member of the U.S.-picked interim government said the death toll could go much higher. About 300 U.N. employees worked at the headquarters.

"There are many who are still trapped in there," said Ahmad Chalabi, a member of the Governing Council and leader of the Iraqi National Congress.