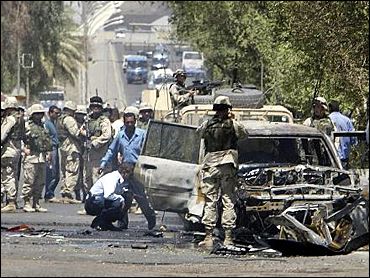 An explosion ripped off the roof of a car near an entrance to the headquarters of the U.S.-led coalition in central Baghdad on Monday.

Two foreign men in the car were killed.

At least two more explosions were heard later Monday in central Baghdad. Their causes were unknown, but smoke rose in the vicinity of coalition headquarters.

The explosion underscored the security problems confronting coalition forces and Iraqi leaders as the June 30 deadline for the handover of limited sovereignty approaches.

President Bush was to address the nation Monday on those handover plans, and the United Nations was due to take up a resolution outlining some details of the interim government.

CBSNews.com will Web cast the president's remarks at 8 p.m. ET.
After Monday's explosion, American soldiers tried to pull the men from the shattered car, and quickly sealed off the area, said witness Kamel Raji. The blast occurred about yards from the "Assassins Gate," one of the main entrances to the Green Zone, which houses the coalition headquarters.

"I saw the roof of the car flying," he said. "My car was parked about 20 meters away when the explosion happened."

The bomb attack was the latest in a series of deadly assaults in the Iraqi capital.

On Saturday, a suicide car bomber in Baghdad killed four people and slightly wounded a deputy interior minister in Baghdad. On May 17, the president of the Iraqi Governing Council, Izzadine Saleem, was killed along with at least six other people near the coalition headquarters.