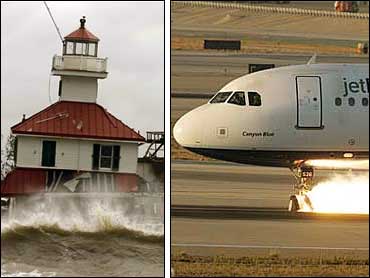 I couldn't have been the only one last week who thought that some of the television news reporters actually seemed disappointed that Hurricane Rita didn't do more damage. I'm not saying that they would have preferred more destruction, but they were just so sky high the day before predicting the worst, it was probably natural that they were a little let down. After all, on television at least, bad news is big news.

I'm not forgetting some of the great reporting in the field on both hurricanes. The television news people brought us the story and challenged the explanations given by public officials. But some of their enthusiasm for the story seemed to evaporate when Rita wasn't as big a storm as they had thought it might be.

It also seemed a bit bizarre to see so many reporters standing out in the rain, telling us it was raining. At the same time, they told us that those who hadn't evacuated the area were being foolish. What about them? How many people saw them on TV and reasoned, "If they can be out in the storm, it must be safe for me to be in my house?"

But at least their being on the scene conveyed what it was like there. There was some rationale to it. Too often, in television news stories, a reporter will be at a location purely to imply that the story is more important than it is. Good examples are often on the late night local news. The anchor will tell us that a crime was committed and that the perpetrator was caught and is now in jail. Then they'll cut to a reporter standing outside the jail, saying that the criminal is inside and will be arraigned tomorrow. Why do we have to see the outside of the jail at 11:00 at night? How does that add to the story?

A perfect case of bad news being the life source of television news happened last week as that JetBlue aircraft was flying around with its front landing gear stuck at a weird angle. This occurred in the midst of all of the pre-Rita hoopla. Some news stations had split screens, half showing a weather map, and half showing the airplane circling around. And you could sense the rising pulse of the anchors as they juggled the stories.

The networks tried to maximize the negative in the JetBlue situation. The airplane circled over Los Angeles International Airport for three hours, using up fuel. During that time, nobody on the plane was in any danger, but some stations showed every minute of those three hours. They interviewed various experts, including pilots and engineers.

Everyone they interviewed said they doubted there would be any problem in landing the plane. They emphasized that pilots are prepared for just such unusual circumstances. But "there probably won't be any problem" is not a good lead for a news story. So each station frantically sought out more and more people who might suggest that there was at least the possibility of the story having a newsworthy ending.

The best they got was a couple of pilots admitting that they had never landed a plane whose landing gear was stuck like that.

Finally, it was time for the plane to land. This is where the story began for me. This was exciting, not like the three hours that preceded it. Would the pilot be able to land the plane smoothly and safely?

And then he did. He landed it perfectly. To me, that would have been a great story — despite worries about equipment, a competent pilot landed the plane without a problem. But again, that's not exciting TV news.

The story continued onto the Larry King show on CNN. The person he was interviewing confirmed that all the passengers were safe, and that none of them had suffered any physical problems. There was a long pause. Then Larry said something like, "That may be true. But who's to say how many of these passengers will suffer from psychological problems because of this ordeal?" He just couldn't resist putting out that little bit of hope for some bad consequences to the story.


Lloyd Garver writes a weekly column for SportsLine.com. He has written for many television shows, ranging from "Sesame Street" to "Family Ties" to "Frasier." He has also read many books, some of them in hardcover.