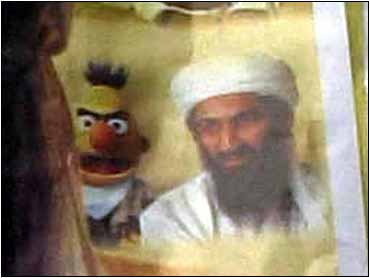 What's a guy like Bert doing with Osama bin Laden?

That question was raised after an image of the beloved "Sesame Street" character showed up in a protest poster featuring pictures of bin Laden and carried by anti-U.S. demonstrators in the streets of Dhaka, Bangladesh, on Monday.

Photographs of the protest transmitted by The Associated Press and other news agencies around the world show an image of the fuzzy little yellow Muppet over bin Laden's left shoulder.

The poster actually is a collage of eight bin Ladens, and Bert is near the largest of them. Other bin Ladens are seen nuzzling up to a bottle of liquor or shown near with what could be a ham. Muslims are prohibited by Islamic religious law from eating ham or drinking alcohol.

Mostafa Kamal, production manager of Azad Products, the Dhaka shop that made the posters, says he had got the images off the Internet.

"We did not give the pictures a second look or realize what they signified until you pointed it out to us," he said.

The company had printed about 2,000 posters, and they were snapped up by the demonstrators, who were angry over the U.S.-led attacks on Afghanistan.

Kamal said he would leave out the controversial images from his next posters.

The image of Bert and bin Laden apparently came from one of the many Web sites that carry "Bert is Evil" images. The images are creations of Net artists who use software to doctor images of historic figures.

The much-maligned Bert is the grumpy bosom buddy to Ernie on the popular U.S. children's show that runs in syndication around the world - though not in Bangladesh.

Sesame Workshop, which produces the show, was not amused.

"Sesame Street has always stood for mutual respect and understanding," the company said in a statement. "We're outraged that our characters would be used in this unfortunate and distasteful manner. ... We are exploring all legal options to stop this abuse and any similar abuses in the future."