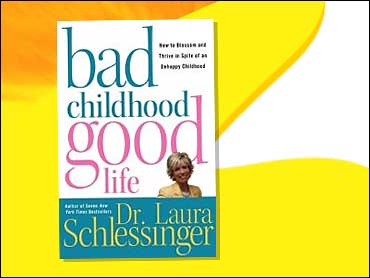 Many people feel baggage from their childhood is keeping them from a fulfilling life as an adult. But that doesn't have to be so, Dr. Laura Schlessinger says in her latest book.

In "Bad Childhood Good Life," the syndicated radio host offers a plan to move past problems lingering from childhood to become a happier and more accomplished adult.

"Most people had a pretty good childhood," she

explained
to The Early Show co-anchor Harry Smith Thursday. "But even in a pretty good childhood, there were probably things that were stressful or upsetting or downright dangerous and destructive.

"I mean, there's a whole range. And people don't have to have been beaten and molested to have struggles from their childhood. Just the way parents related, and communication and emotion, have an impact on how you perceive yourself in love and life."

Schlessinger continued, "There are habits of relating. Then, when we get married and have other friends and work relationships, we find ourselves reacting reflexively from things we learned a long time ago that are so inappropriate right now, and we often can't see it, but it's a deeper issue."

She stressed that, "The choices (many people are) making today are really based on trying to finally make the past be better."

So, how do you change things? How do you move on?

"I think it's one of the scariest things people can do," Schlessinger said. "It's probably easier to become a brain surgeon with your eyes covered than to introspect and realize the things that you feel and think are inappropriate for today, holding you back, making you not happy, making you not function. But gosh darn! It's your identity. It's what you're familiar with. And it's a habit. So the first thing people need to do, and it sounds self serving, but the book really helps.

Another step? Being willing to, as she puts it, experience new adult pain."

Schlessinger told of a realization along those lines in her own life.

"When I grew up," she said to Smith, "until I was about 13, I joked, but I'm not really joking, I thought my name was "Stupid," because that's what my father called me all the time. It wasn't until I started teaching college and realized I could synthesize this material and teach it as though I created it myself, that I went, 'Gosh, darn, I'm not stupid! I'm smart.'

"That's a lot of years of being fearful to find out I was stupid. Do you know the relief one gets when one sees that? But imagine if I'm going to now put myself out and be vulnerable. What if my father was right? And that's the leap that people have to be willing to take, to experience fear of what their limitations might be today. And when people are willing to experience that fear, my gosh, how much they can learn."