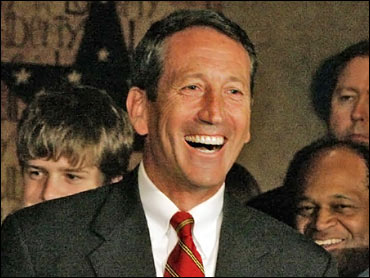 This column was written by South Carolina Gov. Mark Sanford.


They say that those who don't learn from history are destined to repeat it. As we're being greeted almost daily with a new bailout proposal - with one forthcoming from the president-elect - Americans ought to ask whether history suggests they will work.
Neither our recent history nor the evidence from our last comparable economic crisis suggests such efforts will prove effective.

What's worse is that the bailout approach undermines what has historically been the ultimate source of economic stimulus - the American worker and entrepreneur. The market-based economy of our country, responsible for creating 200 years of wealth, is now threatened as never before in our Republic. Furthermore, history shows issuing debt on top of debt, to solve a problem created by too much debt, threatens both the financial strength and the sustainability of our government, given its impact in countries across time.

Each bailout leads many who work hard and take prudent risks to wonder why they should work hard while Washington strays toward a political economy - one in which you need the right lobbyists or a loud voice to be heard by Congress. There's no bailout for your cousin across town or your brother-in-law's little business; they didn't pass muster with those in Washington who are picking winners and losers in today's political marketplace.

Similar measures to stimulate the economy were tried without success in the 1930s.

Prescribing the wrong medicine for an illness can make the patient still sicker. In downturns caused by excess production or inventory, current stimulus efforts could have worked because the goal is to spur consumer spending. By contrast, what we face today is a balance-sheet crisis, and in this situation, a stimulus like the one proposed will have little effect. We were told by leaders in Washington last spring that if we just sent $150 billion in stimulus checks things would get better, and we were told the same thing as we saw $2.3 trillion spent and committed to various stimuli and bailouts for the year. The tab for what's been committed has now crossed $7 trillion - half of the yearly U.S. economy. Our leaders in Washington sound less credible with each new attempt.

The new administration's bailout proposal is said to total between $700 to $800 billion.

In a global slowdown, with a $67 trillion world economy, can another 1 percent make a difference? It's as if we've tried to sweeten a local lake with truckloads of sugar and, upon seeing that this didn't work, propose to toss in a box of donuts and confidently proclaim, "Now that will make the difference!"

The automobile companies got their bailout. Now the states, homebuilders, homeowners, and retailers are lining up for the next round of bailouts, though the history of the early 1930s suggests they won't work.

Amity Shlaes' book, The Forgotten Man, chronicles the history of the Great Depression, and shows it was prolonged and worsened by raising taxes and limiting trade. History also shows Depression-era policies of expanding labor-union power and increasing spending did little to improve the economy: We had nearly 20 percent unemployment in 1939, ten years after the stock-market crash. For today's policymakers, that should underscore how important it is that this administration not pass the so-called card check legislation, which would repeat the expansion of union power that harmed job creation in the 1930s.

In the same vein, history shows the consequence of pulling money from the private sector to fund large public projects. Few people know that it was Hoover, not Roosevelt, who initiated the practice of piling up big deficits to support huge public-works projects like the San Francisco Bay Bridge, the Los Angeles Aqueduct, or the Hoover Dam. But if government spending were the key to preventing recessions, then we'd never have one, since increasing spending is the default response from Washington for every problem.

The bottom line is that history teaches that we need to look much more broadly as we attempt to define "economic stimulus." It is more than simply borrowing money and sending checks out of Washington. Our toolkit needs to be expanded to include issues as wide-ranging as strengthening the dollar to make it a stable store of value, preserving healthy competition in our labor market, and reconsidering unfunded mandates from Washington.

Ben Franklin's words as he left Independence Hall - the same building in which our governors and president-elect found themselves meeting last month - were that we had been given a republic - if we could keep it. Given today's global competition, we would also be wise to remember this thought, and consider how important it will be for our nation's economic health to get the right policy prescription out of Washington.

Mark Sanford is the governor of South Carolina and chairman of the Republican Governors Association.
By Mark Sanford
Reprinted with permission from National Review Online