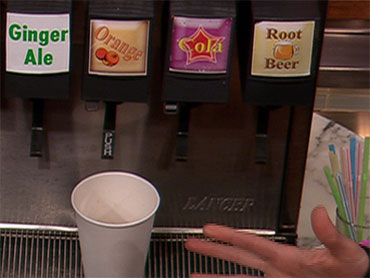 Could you be guzzling down germs?

Research from Hollins University, in Roanoke, Va., finds you very well could be, if your drink came from a cafeteria or restaurant soda fountain.

Researchers tested 30 soda fountains and analyzed them for microbial contamination. They found many of the beverages from them were contaminated with bacteria. Coliform/fecal bacterium was detected in 48 percent of them. The potentially deadly bacteria E. coli was found in 11 percent of the tested drinks.

Dr. Alanna Levine, a primary care physician, said on "The Early Show," contaminated fountain drinks could be a potential health threat to people who are weakened by illness.

"We all have bacteria living in our bodies normally," she said. "It becomes more of a problem for people with compromised immune systems -- so people on chemotherapy, cancer, HIV, that sort of thing."

Levine said there is a range of symptoms from none at all to gastrointestinal distress and other infections in the body.

Levine said if any of these symptoms are extreme, you should contact your doctor.

Contamination can occur from employees or customers failing to wash their hands properly and touch the machine, Levine said. Also, bacteria can enter your drink if the soda fountain machine and/or its water lines aren't cleaned properly.

Levine said, "You can get collections of bacteria in the water line, and that then runs through the whole machine and gets into the beverage."

However, she said she believes the main source of the contamination is likely the machine's water lines.

She said, "Any time any water or liquid sits somewhere, it's just a breeding ground for bacteria."

To help avoid potential contamination, Levine said, employers should begin enforcing stricter hand washing guidelines and tighter regulations on soda fountain cleaning. As for what you can do to avoid bacteria, Levine said it might be a good idea to only drink canned or bottled sodas.

'CSI Miami': Behind The Scenes