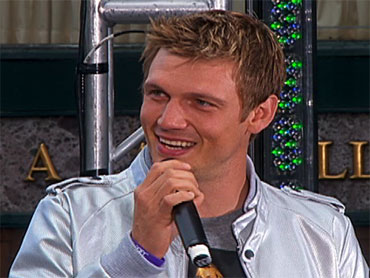 To kick off "The Early Summer Concert Series," the Backstreet Boys appeared on "The Early Show" plaza to perform some of their new and old pop hits.

In the 1990s, "Early Show" co-anchor Julie Chen observed, the Backstreet Boys burst onto the American pop scene. She pointed out few boy bands have had their success and longevity.

The Backstreet Boys, Chen said, have sold over 100 million records, made six platinum albums, and been adored by legions of female fans.

Bill Werde, of Billboard magazine told CBS News, "For a while the Backstreet Boys -- that was the next Beatle mania. There's only a few bands in history that have created that kind of a frenzy."

Formed in Orlando in 1993, the group first found success in Europe, but became a worldwide phenomenon with the release of their third album, "Millennium."

"Millenium" shocked the music industry when a million records were sold in its first week.

In 2006, band member Kevin Richardson left the group. However, despite losing one of their original members, the group comprised of Nick Carter, Howie Dorough, Brian Littrell, and AJ McLean, tours to sold-out concerts filled with fans who are still infatuated with one of America's greatest boy bands.

However, some things have changed since the boy band got its start.

Brian Littrell, 35, for example, has a 7-year-old son named Baylee.

Litrell said, "Fatherhood is the most challenging, but yet rewarding thing in life. You know, I tell you selling records and being an entertainer is an amazing feat, but there's nothing more rewarding to me than being a father, being my son's hero."

"It's amazing. It's definitely an exciting, new chapter in my life. Each of us, we're getting older and growing up. It's new, it's very fun. We're experiencing new parts of life together, we're still going strong as a group, and still having more fun."

Chen also pointed out McLean is off the market. The 32-year-old is engaged. He said the wedding is scheduled for May 7, 2011.

As for Carter, he's lost some weight. He told Chen he has to go to the gym at least four times a week and keep his calorie count under 2,000. The 30-year-old said the group's tour keeps him active, with two straight hours of cardio.

He said, "We're dancing and having fun."

For more with the Backstreet Boys, click on the video below.