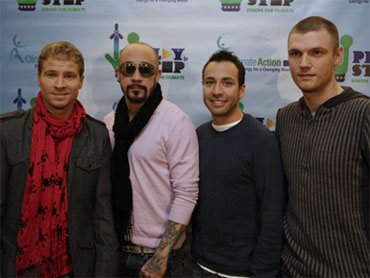 The Backstreet Boys are back.

And although they return to The Early Show as men, the band members are revisiting the pop roots that first brought them to international superstardom, a genre they know best and have mastered for more than 16 years.

The band, known for their hits, "Everybody (Backstreet's Back)," "I Want It That Way" "Larger Than Life," and "Show Me The Meaning Of Being Lonely," will perform live on "The Early Show" on Jan. 18, then thrill their loyal fans with a meet-and-greet session.

To request a spot at the Backstreet Boys "Early Show" concert, click here. Include your full name, the number of people in your party, and contact information in your e-mail.
The Backstreet Boys, made up of AJ McLean, Brian Littrell, Howie Dorough and Nick Carter (former BSB band member, Kevin Richardson left the band in 2006 to start a family) are still performing with the same undying enthusiasm that they had as boys.

Their latest album, "THIS IS US," reflects exactly what it says.

"This record here...we reached back into what made us who we are - that's great pop melodies, great harmonies - and made it current and relevant," Howie Dorough said on the band's official Web site.

"We made a conscious effort to go back to being ourselves," added Brian Littrell. "It's important for the fans to remember what was, but it's also important for them to know where we're headed."

The band released, "Unbreakable," in 2007 and "Never Gone," in 2005, which produced the hit "Incomplete," marking a solid spot for them in the adult-contemporary genre.

Over a decade ago, their self-titled debut landed them in the center of the boy band phenomenon.

Recently BSB was in Copenhagen for the United Nations' climate conference, where they promoted green issues and performed for a concert backed by the European Commission's "Play to Stop: Europe for Climate campaign."