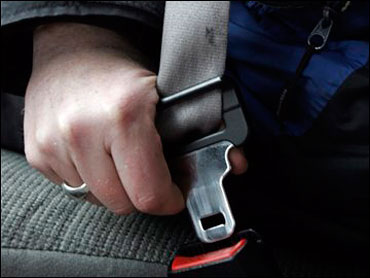 New concerns over backseat auto safety surfaced in May, when Nobel Prize winner John Nash and his wife died in a taxi crash on the New Jersey Turnpike. They were both riding in the back and neither wore a seat belt.

The latest research suggests if states have stricter seatbelt laws, the number of deaths could drop by 17 percent.

Department of Transportation data show 22 percent of backseat passengers do not buckle up. But in a cab, the numbers are much worse. Last year, the New York City Taxi Commission found only 38 percent of cab riders wore seatbelts.

"I think that the problem is that they are (there) for few minutes, and talking sometimes, and they don't care," D.C. taxi driver Noor Ahmed said.

He's been driving a cab in Washington for 20 years and has a sign warning passengers to buckle up or risk a $50 fine.

He said it's "very rare" people wear seatbelts in the back of his cab.

In a crash test video from the Insurance Institute for Highway Safety, an unrestrained child-sized test dummy in the back of a van is launched, striking a passenger up front before slamming head first into the windshield.

In a real-life example, a video shows two women in a cab. One was wearing a seatbelt; the other was not. The unbelted woman flies across the cab and slams into the window.

"People are just as likely to be injured or killed in the backseat if they're not wearing those seatbelts as they are in the front seat," former NTSB Chairman Deborah Hersman said.

Hersman, now president and CEO of the National Safety Council, said the trend is confounding.

"It's hard to explain why people would think that a stranger, someone that's unknown to them, is actually a better driver than even they are," she said.

In 2013, 55 percent of backseat passengers killed in crashes were not wearing seat belts, but only 28 states require adults in the back to buckle up. New Hampshire is the only state that does not require all adults in the front of the vehicle to be belted in.

"Part of it is, I think, there is a false sense of security," Sen. Brad Hoylman (D-NY) said.

He is pushing legislation that would make it illegal not to wear your seatbelt in the back of a cab in New York City. Violators would face a $50 fine.

A sobering statistic from the Department of Transportation states people not wearing a seat belt are 30 times more likely to be ejected from a vehicle during a crash.

In fatal crashes, more than three out of four people who are ejected die from their injuries.

Brittney Griner back on U.S. soil

Returning to Cookeville after 2020 tornado