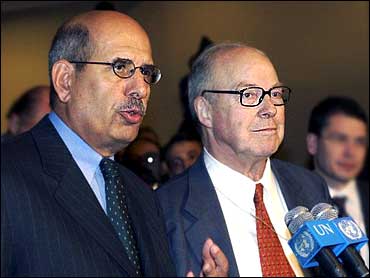 The chief weapons inspectors will return to Baghdad on Feb. 8 for two days of talks with Iraqi officials to try to resolve ongoing disputes regarding inspections, Iraqi officials said Saturday.

A spokesman for the inspectors couldn't confirm the trip yet, saying inspectors were still waiting for an official Iraqi reply. But if the trip goes through, it would put inspectors in Baghdad four days before their next reports to the Security Council, scheduled for Feb. 14.

In a joint letter to the Iraqis on Friday, the chief inspectors, Hans Blix of the U.N. Monitoring, Verification and Inspection Commission and Mohamed ElBaradei of the International Atomic Energy Agency, proposed the dates for the visit.

But the inspectors said they would only be willing to make the trip once the Iraqis agreed to certain conditions and removed major obstacles preventing inspectors from conducting aspects of their work.

Ewen Buchanan, spokesman for the U.N. inspectors, said they were still waiting for Iraq's reply to the letter.

He said the inspectors were ready to meet with their Iraqi counterparts, but that the Iraqis needed to clarify "the purpose of the visit," and "how to achieve prompt progress in the resolution of open disarmament issues."

Iraqi officials suggested that only Blix would be making the trip, but Buchanan said he would travel there with ElBaradei.

The Iraqis didn't specify what, if any, clarifications or concessions Baghdad was willing to make to facilitate the meeting. But Iraq's deputy prime minister, Tariq Aziz, said it was unlikely the inspectors would get to meet with Saddam Hussein.

"I don't think that's going to happen," Aziz said. "Mr. Blix has a certain mission and that mission could be dealt with the experts who will talk to him about technical matters."

Blix and ElBaradei were in Baghdad in mid-January when they agreed with the Iraqis to a 10-point plan aimed at increasing cooperation with inspections, now in their third month.

But in reports to the Security Council on Jan. 27, Blix complained about Iraq's lack of substantive cooperation and suggested the Iraqis may still possess chemical and biological weapons.

ElBaradei's report in the nuclear area was more favorable. He told the council his teams had found no evidence that Iraq had revived its nuclear program.

Still, the two men have said repeatedly that Iraqi scientists must submit to private interviews with inspectors. So far, every Iraqi scientist with knowledge of Iraq's weapons programs has refused to speak with the inspectors unless an Iraqi government representative is in the room.

Blix said Friday he was encouraged that Iraq wants to talk about "transparency," and if he has a chance to meet Saddam he'll tell him the situation is "dangerous" and he must provide evidence quickly about Iraq's weapons programs.

ElBaradei said it was "very important that ... we meet at the highest level of the leadership, and hear from them a clear commitment."