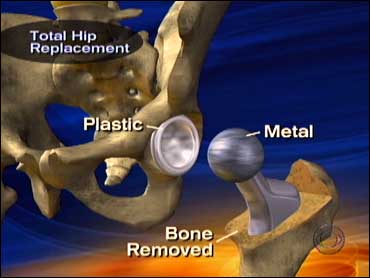 Fifty-one year old Buddy Garlasco is back in the game - and was beating CBS News contributing medical correspondent Dr. Sanjay Gupta on the racquetball court - though he's recently had a hip repaired.

"This is where we play," Garlasco said. And Gupta was ready to be schooled.

How long did it take for Garlasco to get back on the court after his surgery?

"Seven to eight weeks," he said.

Over the years Garlasco's right hip had developed arthritis - the result of his passion for racquetball and his job as a contractor.

"It was so bad that I really couldn't even walk up a set of stairs and it ... encompassed the whole hip," he said.

A traditional hip replacement may have limited Garlasco's activities, even after he healed. So his doctor, William Macaulay, gave him a new choice for Baby Boomers: hip resurfacing.

Resurfacing is just what it sounds like. Instead of removing the thigh bone, as is done with total hip replacement, think of it as adding a cap to the top of the thigh bone leaving most of the bone untouched.

The result? Solid metal on metal, rather than metal on plastic. The technique allows you to save more bone, which results in more mobility.

"The bone has grown nicely into it," McCauley said.

Was this a difficult decision in any way for Garlasco to have hip resurfacing versus a hip replacement?

"It was a no-brainer," Garlasco said.

It's slightly more expensive than total hip replacement and the recovery time is comparable. But hip resurfacing is controversial - so new, there is only about one year's worth of data measuring its success in the United States. And there is a small chance of fracturing the hip joint.

"People will say, 'you know what, Dr. McCauley, the total hip replacement works just fine. Just stick to that.' And you way what to that?" Gupta asked.

"At one year, we have a significant number of people who have done the resurfacing on and they are actually functioning higher with less pain," McCauley said.

"I could tell two days after I was operated on that my hip felt better already," Garlasco said.

In the long term, no one is quite sure how well Buddy's hip will hold up - MacCauley says about half the patients are likely to have to get their resurfacing re-done after 15 to 20 years.

But today, Buddy's hip took a pounding. And so did Gupta.

For more information on the procedure, visit the Web site of Birmingham Hip Resurfacing.