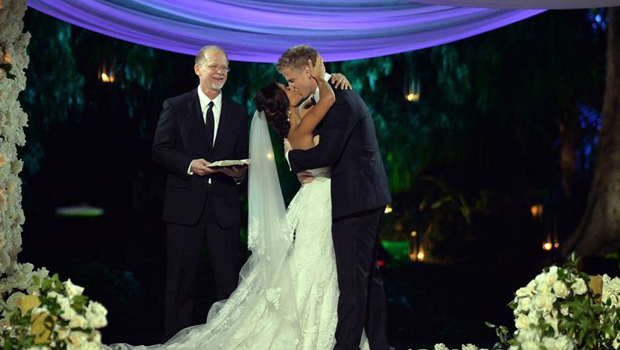 Sean Lowe is no longer a bachelor.

Lowe, 30, and Catherine Giudici, 27, tied the knot on Sunday, in what "The Bachelor" star's father Jay, who officiated the wedding, called "an epic fairy tale on display for the whole world to see."

The guest list included a few "Bachelor" alums. Jason and Molly Mesnick, Ashley Hebert and J.P. Rosenbaum, Trista and Ryan Sutter, and newly engaged, Desiree Hartsock and Chris Siegfried were all invited to the ceremony. Lesley Murphy, from the couple's season of "The Bachelor," was also one of the bridesmaids.

The bride walked down the aisle in a stunning Monique Lhuillier gown, while Lowe was suited up in a Dolce and Gabbana tuxedo.

The ceremony aired live on ABC for millions to see. Lowe met his bride on "The Bachelor." The two got engaged in Thailand in November 2012.