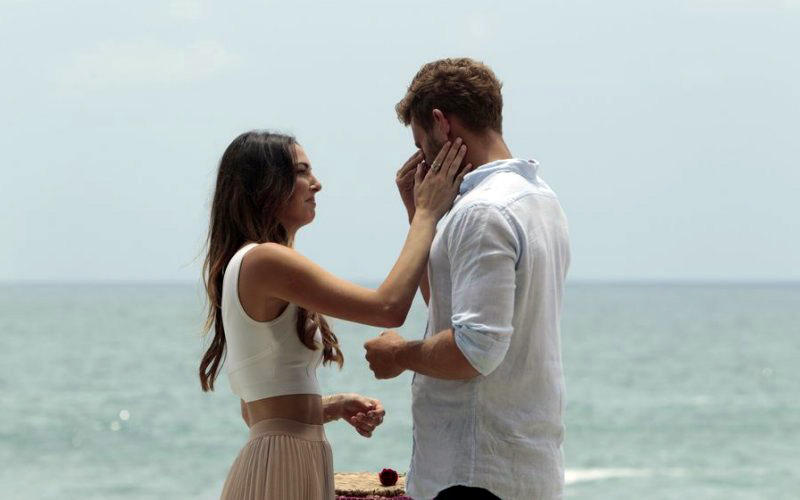 Forget “Will you accept my rose”: On ABC’s raucous spinoff series, “Bachelor in Paradise,” the operative question is “Will you marry me?” In fact, as the show nears its end, any and all couples who are not ready to walk down the aisle are encouraged to break up rather than leave paradise ringless ... or at least that’s the pressure that’s been put on couples in recent seasons after the precedent was set in Season 1. Thanks a lot, Marcus.

That was the case for freshly minted Bachelor Nick Viall last night, who avoided eye contact and did his best “Denver the guilty dog” impression on the proposal platform as beautiful, yet reserved Jen (from Ben’s season) professed her undying love for him. Despite meeting with Neil Lane (for the third time) -- an irony that was not lost on the jewelry designer -- Viall parted ways with his “Paradise” girlfriend rather than popping the question. It appears the ability to rock a crop top does not always get you the man.

A record three eligible bachelors actually did propose last night, though, and the resulting three happy couples -- Carly and Evan, Lace and Grant and Josh and Amanda -- then appeared on “After Paradise” to demonstrate the staying power of their love. We rewatched their love stories. We saw snapshots of them together in real life. And for “Jamanda,” easily the most controversial couple in Paradise, we were given a taste of a cheesy photo shoot with her two daughters, though the expression on the face of Amanda’s older daughter did little to quell the fears of all the Josh Murray haters out there.

Viewers were polled and the results showed that people are most excited to see Carly and Evan walk down the aisle first. However, at this point, all three couples presumably want to become the next Jade and Tanner. Who wouldn’t want that sort of fairy tale ending (ahem, or a fully paid for, nationally televised wedding)?

It remains to be seen whether ABC will film and air the three wedding ceremonies this time around. Maybe they’ll pick the quirky fan favorites. Maybe they’ll do it as a bulk package. Or maybe they’ll go the Des-and-Chris route, and do nothing at all.

Whatever happens -- even if Grant and Lace don’t get their nationally televised fairy tale ending -- at least they’ll always have those matching Mexican wrist tattoos: a saving “grace,” for sure.