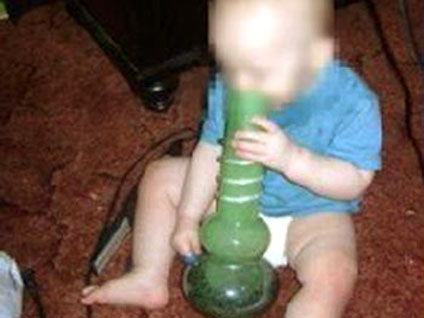 NEW YORK (CBS) Hats off to the Florida mother who posted a picture of her baby "smoking" out of a bong on Facebook.

Not only has she managed to outrage mothers all over the world, she has also gotten the attention of the Florida Department of Children and Families who have in turn launched an investigation into her parenting skills - or lack thereof - reports Sky News.

The 19-year-old mother from Keystone Heights, northwest of Gainesville, is defending the photo. She claims it was taken as a joke and posted on Facebook so that she could show it to one of her friends.

Newsflash! Facebook is a social networking website that hosts millions of members, including one concerned citizen who saw the photo and sent it to a Florida-based news outlet, says RadarOnline.com.

The photo has since been cruising through various media outlets leaving stunned viewers in its wake.

Eventually, the photo fell into the hands of the Florida Dept. of Children and Families which is now in the process of drug testing both the mother and the baby, says Sky News.

John Harrell the spokesperson for the group told Sky News, "We are alarmed that any parent would take pictures of their child next to what is obviously drug paraphernalia."

The unnamed mother has come forward and stated to Sky News via Facebook, "If u look at the picture u can see that there is no bowl in the TABACCO [sic] pipe...I would never ever ever let him get high."

If drugs were used by or found near the baby, she could face serious charges, and could possibly lose her 11-month-old son to the state of Florida.