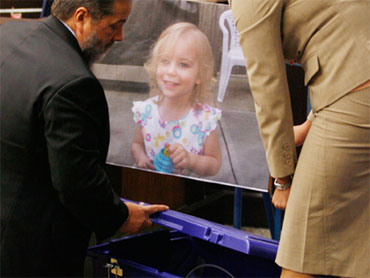 GALVESTON, Texas (CBS/AP) Did Royce Clyde Zeigler II murder his 2-year-old stepdaughter, place her remains in a plastic box, and then toss her into Galveston Bay?

Prosecutors are wrapping up their capital murder case against Zeigler, who faces the prospect of life in prison if convicted of killing the toddler, who became nationally known as "Baby Grace" after a fisherman found her remains in a box on an island in Galveston Bay.

That was in October 2007, before the child's relatives in Mentor, Ohio identified her as Riley Ann Sawyers.

According to the Houston Chronicle, Trenor told investigators Zeigler called in sick to work July 25, 2007, the day of the alleged murder, so he could stay home to properly discipline 2-year-old Riley.

Prosecutors on Monday displayed the plastic bin in which the corpse was found. Zeigler has admitted to investigators that he and Trenor packed Riley's body into garbage bags in a plastic box, according to the Chronicle.

On the witness stand, the defendant's brother, Hiram Zeigler, said Royce Clyde Zielger II lied repeatedly when he was tricked into viewing an internet image of "Baby Grace" after her body was found, the paper reported.

"His eyes were big, his jaw dropped, he looked shocked," Zeigler's younger brother testified about Ziegler II's reaction to seeing an artist's sketch of the blonde, blue-eyed "Baby Grace" on a computer belonging to the couple.

Hiram Zeigler also testified his older brother changed his story, initially claiming he had recently spoken with his stepdaughter and saying she was staying with relatives in Texas, but then saying Riley had been abducted by an Ohio child welfare worker.

Now Zeigler's lawyers get ready to make their case. The Galveston County Daily News reports the prosecution was expected to rest Tuesday.

Prosecutors are not seeking the death penalty against Zeigler, who is accused of killing 2-year-old Riley during a July 2007 disciplinary session.

It was several months later that Riley's paternal grandmother, Sheryl Sawyers of Mentor, Ohio, recognized her grandchild from an artist's drawing and called the Galveston County Sheriff's Office.