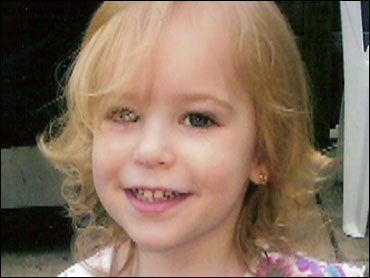 Investigators think they have some of the answers they have been looking for ever since a little girl's body was found in Galveston Bay, washed ashore in a blue plastic bin. They are a grim reward.

According to court documents, the mother of 2-year-old Riley Ann Sawyers told police she and her husband beat the girl with two leather belts and held her head underwater in a bathtub in July. Riley's stepfather then threw her across the room, slamming her head onto a tile floor.

Kimberly Dawn Trenor, who had moved her daughter this year from suburban Cleveland to Texas, said in her statement to police that the couple bought the plastic bin and placed the girl's body inside it that evening.

The bin stayed hidden in a storage shed for one to two months, until the couple traveled 75 miles south from their home in the Houston suburb of Spring to Galveston Bay, where the body was dumped.

A fisherman found the bin Oct. 29, and authorities spent weeks sifting through thousands of leads as they worked to identify the girl they dubbed "Baby Grace." DNA results are pending, but there seems little doubt that the child is Riley.

"It was a few weeks ago I held up this little shoe and asked, 'Who is Baby Grace? Who does this belong to?"' sheriff's Maj. Ray Tuttoilmondo said at a news conference Monday. "We're now fairly confident we know the answer to that."

Trenor, 19, and her husband, Royce Clyde Zeigler II, were arrested early Saturday and are in custody on charges of hurting Riley. The investigation continues.

Zeigler, 24, attempted suicide last week and wrote a note saying, "My wife is innocent of the sins that I committed," according to the court documents, which were filed Saturday and first reported Monday by Houston television station KTRK.

An autopsy revealed that Riley suffered three skull fractures, but the cause of death has not been determined.

Riley's paternal grandmother, Sheryl Sawyers of Mentor, Ohio, hadn't seen her granddaughter in months when she saw a police sketch of "Baby Grace." Thinking it might be Riley, she called authorities in Texas.

Sawyers wiped away tears at a news conference Monday in Mentor. She held up the Elmo doll she had already bought Riley for Christmas and a studio photograph of her granddaughter wearing angel wings.

"It's hard to think that I'll never see her again," she said.

In her statement to police, which was included in an arrest affidavit, Trenor said that after her daughter was killed, Zeigler had her forge a document that the Ohio Department of Children's Services had taken Riley away because of allegations of sexual abuse.

Tuttoilmondo said Trenor had told relatives that someone claiming to be a social worker from Ohio, where Riley's father lives, took the girl in July.

"It didn't make any sense," said Sheryl Sawyers. "None of it made sense."

Trenor's attorney, Tom Stickler, said she has cooperated with authorities. He declined to comment directly about her statement to investigators.

"But from what she said, there is no doubt that the girl found is Riley Sawyers," Stickler said.

Trenor and Zeigler were charged with injury to a child and tampering with evidence, Tuttoilmondo said. Bail was set at $350,000 each. The couple's next court appearance was expected to be scheduled on Tuesday.

Wendell Odom, Zeigler's attorney, declined to comment on the case except to say Zeigler grew up in Spring, about 75 miles north of Galveston, and works as an instrument technician in the oil industry.

Trenor and Zeigler met a couple of years ago playing an online game, World of Warcraft, and she moved with her daughter from suburban Cleveland to Spring in June, Stickler said.

The Sawyers family's attorney, Laura DePledge, said they take comfort in knowing that the girl is "resting peacefully and is no longer subject to abuse."

DePledge said Trenor and Sawyers' son, Robert Sawyers, also of Mentor, had been high school sweethearts. Sheryl Sawyers said she has not seen Riley since the girl and Trenor moved to Texas.

Robert Sawyers, who works in an auto-parts store, was never married to Trenor but lived with her and their daughter in his parents' home for about two years. He and Trenor split up after March 31, when he was charged with domestic violence against her.

DePledge said there was insufficient evidence to support the charge, which was reduced to disorderly conduct. Robert Sawyers is now married and has a 3-month-old son.

Riley "had a very big imagination for such a little girl," he said of his daughter. "She could play with anything and have fun with it."