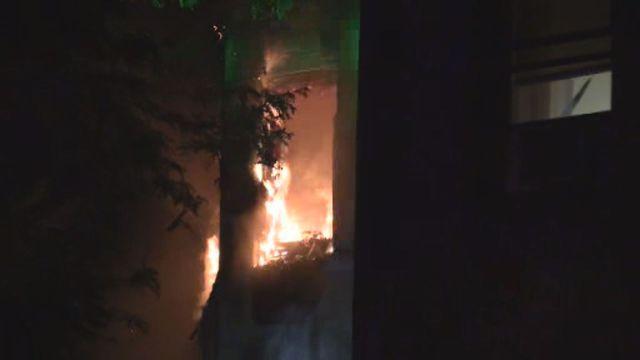 CHICAGO — Three children and a man were killed a in an extra-alarm fire early Tuesday in the South Chicago neighborhood, and police said a “person of interest” was being questioned about the blaze, which appeared suspicious.

The fire started around 1:40 a.m. in a three-story apartment building, reports CBS Chicago.

One witness said he tried to get his own ladder to help people trapped on the third floor, but before he knew it, a man jumped from a window with a baby in his arms. Authorities later confirmed a 3-month-old girl was taken to Comer Children’s Hospital, and was pronounced dead.

Firefighters extinguished the blaze at around 4:30 a.m., and Fire Department Deputy Commissioner Arriel Gray said firefighters found the bodies of two girls and a man hours later during a search of the building once it was safe to go inside. All three were found on the third floor of the building. The girls were found in one apartment, but not together, and the man was found in an adjacent apartment.

At least two other people were injured in the fire. Gray said a 36-year-old man was taken to Advocate Christ Medical Center in critical condition. That man later was transferred to the burn unit at Stroger Hospital. Witnesses said that man was the father of the three girls, who jumped from a window with the 3-month-old in his arms.

The Fire Department’s Office of Fire Investigations and the Police Bomb and Arson Unit were investigating the cause of the fire. Gray said the fire was “suspicious,” but he said he did not know if an accelerant was used, or where the fire started.

A woman who lived in the garden-level apartment where the fire started said a man who had been harassing her for money intentionally set her back porch on fire.

“He was at my back door. He was the only one at my back door, and when I closed my door in his face and told him I ain’t have nothing for him, he was kicking and beating and bamming at my door, and I ignored him, and I went in my bedroom. When I went in my bedroom, I got on the phone. Next thing I know, the dog’s barking, and I get up to go see why my dog’s barking. At this point in time, I didn’t even see no flames yet,” Latoya Terry said.

Police confirmed a “person of interest” was being questioned Tuesday morning.

Gray said, when firefighters arrived, the interior and exterior stairwells had been compromised and were impassable, so crews fought the flames from a defensive position.