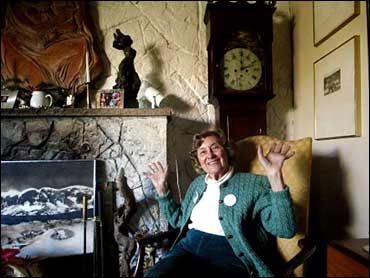 In 1970, when the law forced Maggie Kuhn to retire at age 65 from her executive position in a Philadelphia church, colleagues gave her a sewing machine as a parting gift.

She never opened it - and instead, rebelled against everything it stood for, leading marches and staging guerrilla theater to protest the widespread discrimination against the elderly.

The Gray Panthers, the group she founded with a name inspired by the Black Panthers, aimed to radicalize older Americans and fight the image of the old as useless, infirm and withdrawn.

Their achievements are many, including the repeal of the mandatory retirement law.

But the group, once a force, is in decline - and sociologists blame tomorrow's seniors, the baby boomers, who are still unwilling to call themselves middle-aged.

"They hear the word 'gray' and it turns them off. I think it's such a juvenile attitude," said May Hollinshead, the 90-year-old president of the North Jersey chapter of the Gray Panthers.

It's a paradox, said Dr. Robert Butler, founder of the National Institute on Aging, since the boomers, a group representing a third of the U.S. population, will put an unprecedented strain on social services when they become too old to care for themselves. They stand the most to gain from groups such as the Panthers, who continue to fight for nursing home and health care reform.

Hollinshead, who has kept her own chapter in Leonia, N.J., alive for 34 years, watched it go from a vibrant, grass-roots network of 50 members, to just half-a-dozen.

Experts point out that the decline in a group which stands for senior power comes as America's demographics are about to shift to gray.

Every 7.6 seconds, a baby boomer turns 50. By 2023, one in five Americans will be over age 65 - currently, the percentage of seniors in Florida.

The Panthers' leadership agrees that the group is at a crossroad.

"We're going to have to do things differently," said Susan Murany, executive director of the Gray Panthers office in the nation's capital.

"The baby boomers have celebrated youth - if you want to attract folks, you can't set it up at the senior center," she said.

But Murany prefers to see the fall in membership as a result of the death of the charismatic Kuhn in 1995. It's also symptomatic of the overall decline in activism since the end of the Vietnam era, she said, explaining that from the beginning the Panthers were actively anti-war.

But the group's troubles are nothing new to the AARP, the nation's largest senior organization with a membership of 35 million.

Several years ago, the AARP underwent a makeover when studies showed it was failing to reach the boomers. As part of that effort, it abandoned spelling out its name, the American Association of Retired Persons, to avoid mention of the word "retired."

"Just a few months ago, we crossed the point where more than half of our members are still employed," said Christine Donohoo, associate executive director of the membership division. "The boomers want to be seen as vibrant - and we need to be responsive to that."

Other efforts included phasing out Modern Maturity and replacing it with AARP Magazine - a publication with three distinct versions, meant to target the three major phases of old age. One is specifically dedicated to the 50-65 demographic.

The irony, the Gray Panthers say, is that unlike the AARP, the Panthers always intended to be intergenerational.

Before a TV talk show producer gave Kuhn the idea of naming the group after the revolutionary Black Panthers, the organization went by the name The Consultation of Older and Younger Adults for Social
Change.

"Our slogan was 'Age and Youth in Action,"' said veteran Panther Joy Spalding, 77, whose sofa at home in Portland is adorned with Panther pins, bearing the motto under a prowling cat.

The group appealed to the young early on because of its stance on the Vietnam War. In 1970, Kuhn sent a delegate to Hanoi to meet with prisoners of war. Soon after, the Panthers began organizing for care packages to be sent to draft resisters in Canada.

Even as its numbers dwindle, the group has continued its fight. Texas Gray Panthers last year tried, but failed to defeat Proposition 12, a constitutional amendment which they argued would put the elderly at risk. In Oregon last month, the Panthers joined with a broad-based coalition supporting a proposed tax increase - one which failed at the polls and will most likely lead to cuts in senior services.

Nationally, the Panthers launched RePhorma, a campaign to hold pharmaceutical companies accountable for the escalating price of prescription drugs.

As the original activists age, however, few in the younger generation are choosing to join, and a different type of organization is taking the world by storm. Its success holds clues to what the boomers are looking for.

The Red Hat Society didn't start out four years ago to be a movement, but a play group for women over 50. Its stated aim is to wear fancy red fedoras and matching boas, have fun and greet age with humor, verve and elan.

Butler sees groups such as these as symptomatic of the boomers' agenda of staying young.

"I really see them as a generation at risk," he said, citing a study which shows that boomers have not saved for old age, even as census figures indicate theirs is the generation that will break the back of social security.

The Red Hat Society, meanwhile, fights off advances by various senior-oriented groups and actively eschews serious causes. "That would be the death of us. Our goal is to be a recess for women," Cooper said.

It's an ethic that's enough to make Kuhn turn over in her Philadelphia grave.

"Here lies Maggie Kuhn," says her epitaph, "under the only stone she left unturned."