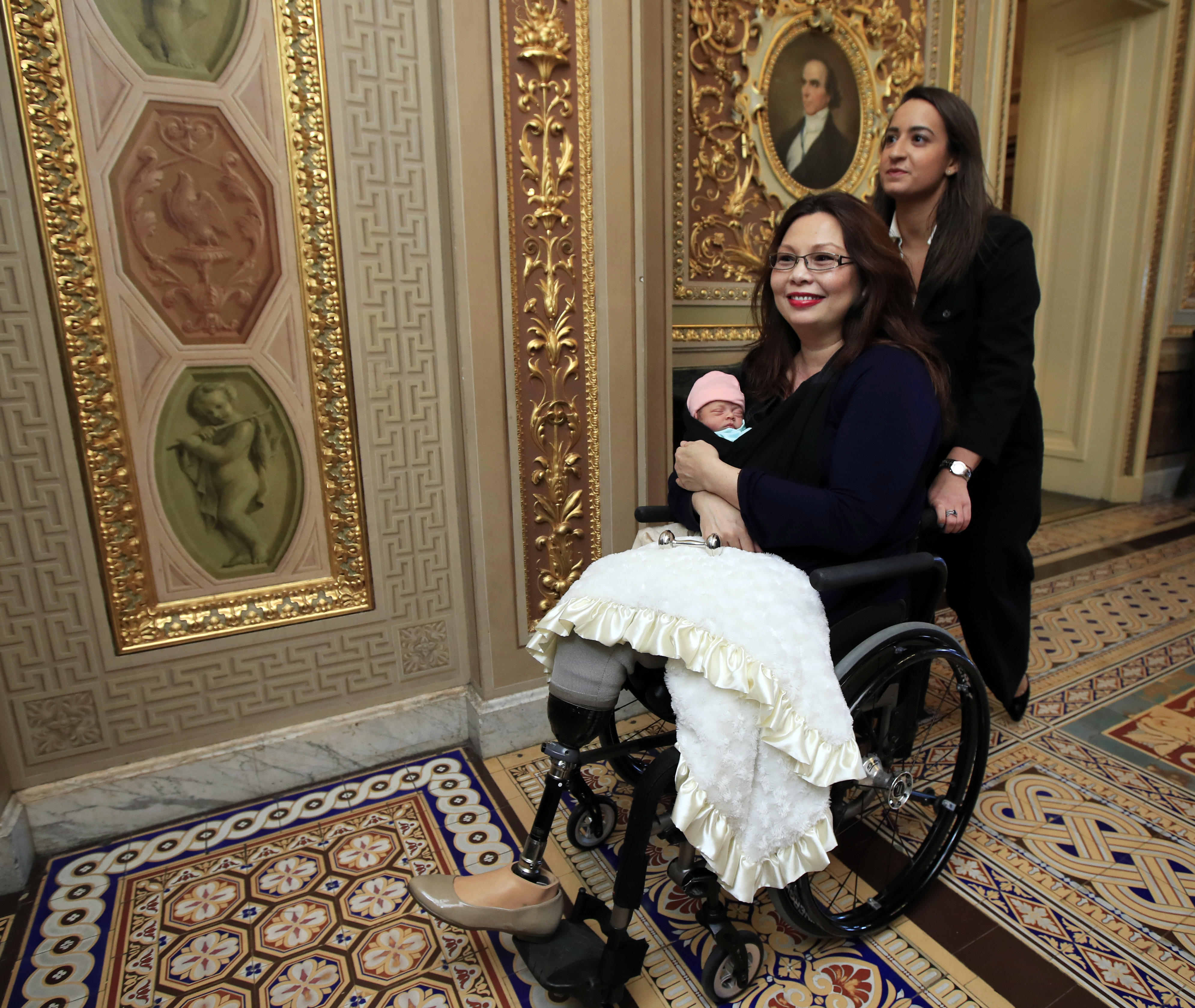 Senator Tammy Duckworth voted on the Senate floor on Thursday with her newborn baby daughter Maile cradled in her arms. Her appearance comes just one day after the Senate voted to allow the babies of its members into the tradition-bound chamber. The inspiration for the historic change of rules was Duckworth's daughter, born April 9. Duckworth wanted to resume voting while on maternity leave as the Senate requires that votes be cast in person.

"For example, you are not allowed to bring children onto the floor of the Senate at all," Duckworth noted on Politico's "Women Rule" podcast in February. "If I have to vote, and I'm breastfeeding my child, especially during my maternity leave period, what do I do? Leave her sitting outside?"

She added, "I can't leave her with a staff member, that's a conflict of interest, so am I allowed to vote? Can I not do my job? What are some of the requirements there?" Duckworth said the vote on Wednesday helps "bring the Senate into the 21st Century."

Duckworth tweeted Thursday morning that she was due back into the Senate for a vote on the confirmation of NASA administrator Jim Bridenstine. She shared a photo of an outfit picked out for her daughter to wear on the floor just in case she was needed back at work.

Duckworth was all smiles as she later entered the Capitol, holding baby Maile who was wearing a pink cap.

CBS News' Nancy Cordes noted to Duckworth that baby Maile, who is just a couple weeks old, is quite young to be making history. Senator Duckworth joked, "She is! I hope we aren't setting expectations too high for her!" Duckworth was then greeted by her Senate colleagues on the floor, including Sens. Chuck Schumer, Patty Murray, Jeff Flake, Amy Klobuchar and Majority Leader Mitch McConnell.

Although no one objected, the idea didn't sit easily with some senators in both parties concerned that babies would disrupt "Senate decorum."

Sen. Klobuchar says she spent nearly two months privately reassuring Republicans and Democrats that the new rule would not mean diaper-changing or nursing in the Senate chamber.

On Thursday, Sen. Orrin Hatch told reporters on Capitol Hill, "If a Senator wants to bring a baby on the floor I don't have any problem with that."

He added, "I don't think people are going to bring babies to the Senate floor but it's a fun thought is all I can say."