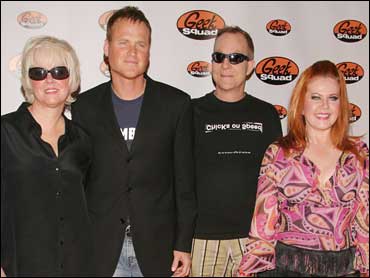 Fifteen years after their last album of new material, The B-52s are wrapping up work on their next one.

The quirky dance-pop outfit, which burst onto the new wave scene in 1979 with songs like "Rock Lobster" and cracked the pop charts in the late '80s with the party classics "Love Shack" and "Roam," returned to their hometown of Athens, Ga., to finish recording the as-yet unnamed record.

"We all lived down there for two months and just got back in the swing of things," singer Fred Schneider said from his home on Long Island, N.Y.

He said the group, which has been performing together since 1998 after taking an extended break, always had intentions of recording again. But with members living in New York, Georgia and Florida, it was tricky to get together and write new material.

Schneider said the 11 new tracks will maintain the B-52's danceable, party vibe but will showcase some new directions for a band that, along with R.E.M., helped put Athens on the map as a hotbed of alternative music.

"There's more electronica on it," he said. "It's up-tempo and a bit sexed-up. It's sexier than ever."

Meanwhile, the group plans a handful of U.S. and European tour dates this summer, with a full concert schedule planned when the album is released.

"It's great to perform when we have new material," Schneider said. "That makes all the difference."