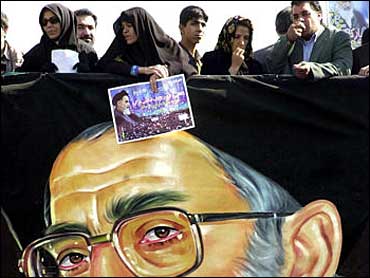 Angered by the United States' labeling of Iran as part of an "axis of evil," hundreds of thousands of Iranians demonstrated Monday with chants of "Death to America" — an old insult enjoying a fresh wave of popularity.

This year's gathering to mark the 23rd anniversary of the Islamic Revolution, was much larger than last year as Iranians used the occasion to show their anger with U.S. President George W. Bush's condemnation of their country in his State of the Union address last month. Many Iranians who said they rarely join such celebrations spoke of taking to the streets to show solidarity.

"This year, despite insults to the great Iranian nation and the trumped-up charges against it, the Iranian nation has commemorated the anniversary of its revolt in a greater scale than before," President Mohammad Khatami said.

Khatami said the United States should understand the message of Iran's revolution: independence, freedom and an Islamic Republic.

His speech repeatedly was interrupted by chants of "Death to America!" — a phrase dating back to the days of the 1979 revolution, but that had lost its edge in recent years as the idea of a gradual rapprochement with the United States had gained a following among Khatami's reform-minded supporters.

Early in the U.S. war on terrorism, American officials spoke of better cooperation with Iran after it tacitly approved their campaign to topple the Taliban rulers of Afghanistan. But recently, U.S. officials have accused Tehran of trying to undermine Afghanistan's new government and of smuggling weapons to the Palestinians. Iran denies the charges.

Last month, President Bush said in his State of the Union address that Iran was part of an "axis of evil" — along with Iraq and North Korea — because it seeks weapons of mass destruction. Iran rejects the accusation. He also said Iran "exports terror, while an unelected few repress the Iranian people's hope for freedom."

Bush's words have drawn strong condemnation across Iran's political spectrum. They have pushed the nation's domestic political troubles — a longstanding power struggle between moderate and conservative clerics — into the background, at least for now, as people pull together against what was perceived as an unwarranted insult.

Khatami acknowledged that there were "many differences" among Iran's leaders, a reference to the power struggle, but said the country is united in supporting the cause of the 1979 Islamic revolution.

"Let's not conceal that there are deficiencies and dissatisfaction, but undoubtedly the whole nation is united in supporting the revolution and the path it has chosen," he said.

"The American people have every right to ask their leaders how long should they pay the price for their faulty policies. What policies and what reasons caused the Sept. 11 attacks?" he said.

One of those taking part in the demonstration, the chief of the elite revolutionary guards, Gen. Rahim Safavi, told state television: "Today's rallies are the biggest deterrent to U.S. threats. The people have shown they have remained faithful to the objectives of the revolution."

The streets were awash in color as people carried placards and balloons in the red, white and green colors of the Iranian flag. Helicopters dropped red flowers over the crowd.

Banners written in Farsi and English read "We still follow the ideals of the Islamic revolution" and "America cannot do a damn thing." — a favorite expression of Ayatollah Ruhollah Khomeini, the spiritual leader of the revolution.

One placard read in English: "Bush is a Dracula."

"Outside threats only result in greater national unity," said Zahra Dowlatabadi, a 40-year-old homemaker who said national pride after Bush's speech led her to attend her first mass demonstration in years.

By ALI AKBAR DAREINI
©MMII The Associated Press. All Rights Reserved. This material may not be published, broadcast, rewritten, or redistributed

Minerals never before seen on Earth discovered in massive meteorite
Thanks for reading CBS NEWS.
Create your free account or log in
for more features.
View CBS News In
CBS News App Open
Chrome Safari Continue
Be the first to know
Get browser notifications for breaking news, live events, and exclusive reporting.