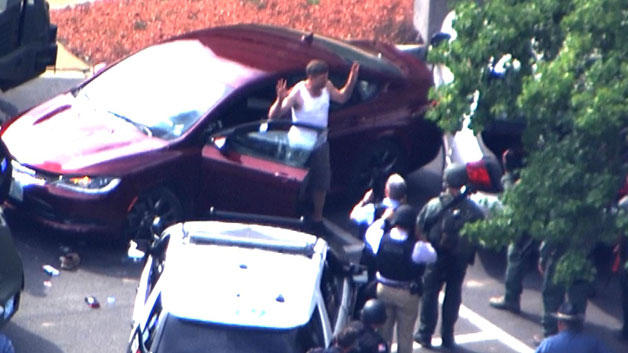 MEDFORD, Mass. – A man demanding to hear a song by the Insane Clown Posse on Kiss 108 was arrested after a tense standoff with police Monday afternoon, CBS Boston reports.

As police pulled an ax and several large knives from the suspect's car, witnesses were still trying to digest what they had just seen.

It began just after 1:30 Monday afternoon with 911 calls about a man in a red car brandishing weapons outside the radio studios on Cabot Road in Medford where he apparently tried unsuccessfully to request the song "My Axe" by the Insane Clown Posse and then ranted about his failure to several passersby outside.

"He got out of his car with a machete, stopped a girl who worked up on the second floor and said 'I want you to play a song for me,'" Doreen Schaivone told CBS Boston.

A heavily armed swarm of responding officers boxed in the suspect's red sedan outside the building and the standoff began as the suspect drank beer and huffed something from a paper bag. At one point he climbed out of his vehicle.

"They tried to get him to get down on the ground and he refused and he told them 'you're just going to have to kill me then,'" said Gross.

Cell phone video shows police trying unsuccessfully to subdue the suspect with a Taser and a beanbag — even as the police negotiator tried to play ball with the suicidal man's song choice.

"The negotiating officer was trying to get that song on the radio at one point just so that he would calm down," Gross said.

It took the better part of three hours but police finally convinced the suspect to surrender with only some minor self-inflicted cuts on his arms.

"It was a peaceful resolution for everybody involved and nobody got seriously injured and we're grateful for that," Medford Police Lt. Joseph Casey said.

Police have declined to release the suspect's name, but say he will undergo a psychiatric evaluation.